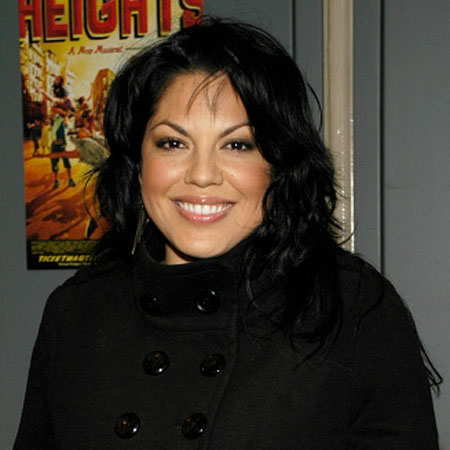 Sara Elena Ramirez was born on August 31, 1975 in Mazatlán, Sinaloa, Mexico. Her father was Mexican and her mother was of half Mexican and half Irish-American descent.

When Ramirez was eight years old, her parents got divorced and her mother took her to Tierra Santa, in San Diego, California, where they settled.

She completed her schooling from San Diego School of Creative and Performing Arts. Ramirez attended and graduated from the Juilliard School in New York City, where she refined her skills as an actress.

Sara has been blessed with many roles on Broadway. She has starred in The Cape man, Fascinating Rhythm, A Act, The Vagina Monologues but it was Monty Python's Spamalot that made her a recognized Broadway actress. Originating The Lady of the Lake, Sara won many awards for her role in Spamalot and it even won her a part in Grey's Anatomy.

In 2006, Sara graced our TV screens as Dr. Calliope "Callie" Torres, a tough orthopedic surgeon on ABC's hit show Grey's Anatomy. As revealed in a special Grey's Anatomy-themed episode of The Oprah Winfery Show, ABC were so happy with her work in Spamalot, they offered her the chance to choose any of their shows to star in. Subsequently, she chose Grey's and was the second actor (behind Kate Walsh) to be offered a permanent role after only initially signing on for a recurring role. She has also had many guest spots on TV shows like Law & Order: SVU, As The World Turns, Spin City and many other shows including two pilots that didn't get the 'greenlight' to continue.

She has also starred in many movies but never had a main role. She has starred in You've Got Mail, Spiderman, Washington Heights and many others. Ramirez provided a cappella vocals in the song "Silent Night" for the soundtrack of the show's sixth season episode "Holidaze," airing November 19, 2009. On December 21, 2009, this version of the song was released as a single on iTunes. Ramirez's voice was also showcased in the musical episode of Grey's Anatomy, Ep. 718 "Song Beneath the Song", which aired March 31, 2011. Her solo music debut was an extended play released on March 27, 2011 through the iTunes Store. It included three original songs, as well as a recording of "The Story", performed on the musical episode of Grey's Anatomy.

On June 17, 2011, Ramirez and long-time partner, Ryan DeBolt, a business analyst at TIMEC, got engaged in Paris, France. They were married on July 4, 2012 in a private beachside ceremony in New York. They haven’t divorced yet.

She is an American citizen but of Mexican origin. Her mother was also half Mexican and half Irish.

Her estimated net worth is around 5 million USD.

Speculations say that she is expecting a baby with long-time partner after she was spotted with a prominent stomach bulge on Thursday evening (March 27, 2014), during romantic dinner date nearby her place.