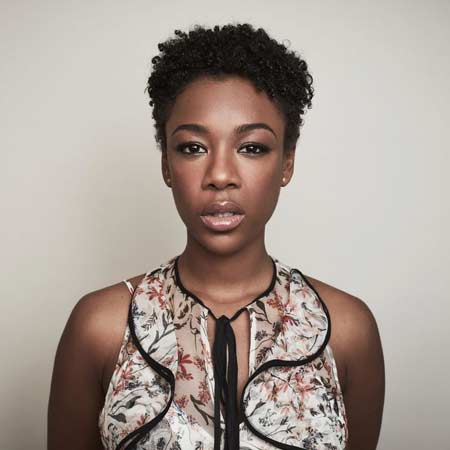 Samira Wiley born on 1987 is an American actress, producer, and model who is best known for her role, Poussey Washington in the Netflix series Orange is the New Black and her role as Moira in the Hulu series, The Handmaid's Tale. She is a lesbian and is married to wife Lauren Morelli, writer of the Orange is the New Black after dating for 3 years.

Wiley debuted in acting from 2011 comedy movie, The Sitter and eventually became a part of many movies and TV series later in her career. In 2014, Wiley was awarded Out Magazine's Ingenue of the year and the following year with Human Rights Campaign's Visibility Award for her extreme activism work for the LGBT community. As of 2018, Wiley will be appearing in the upcoming American comedy movie, Social Animals, written and directed by debutant director Theresa Bennett due to release on June 1, 2018.

Wiley was born Samira Denise Wiley on April 15, 1987, to Christine and Denice W. Wiley, co-pastor of Covenant Baptist United Church of Christ. She was raised in Washington D.C  with her two siblings Aiyana Kai Maat and Joshua Dhameer and attended Duke Ellington School of Arts there. Before moving to New York, she attended Julliard School which is a performing arts school known for teaching dance, drama, and music to undergraduate and graduates.

Wiley trained as a theatre performer there and continued performing only in theatre at the start of her career. She graduated from Julliard in 2010 with a degree of BFA ( Bachelor of Fine Arts).

Wiley debuted in the movie industry in 2011 playing Tina in the comedy movie, The Sitter and the same year played Maria in a theatrical production of Love's Labour's Lost by The Public Theatre. She also played Gina in the series Unforgettable and was seen in an episode of 2012 series Person of Interest.

In 2013, she was cast in the movie Being Flynn. Her career escalated when she was cast in Orange is the New Black series for the first two season but since the development of her character and being a fan-favorite she managed to appear in the other seasons as well which ended in 2017.

While working on the series she was involved in other projects as well, including Rob the Mob(2014), Nerve and 37 (2016) and Detroit (2017), an American period crime drama. She is cast in the upcoming American comedy movie, Social Animals scheduled to release on June 1, 2018.

Wiley appeared on the cover of Maniac Magazine in it's September/October 2014 issue showcasing a series of bold, chic and high-fashion styles. She also graced the cover of Out magazine the same year alongside famous celebrities like Zachary Quito, singer-songwriter Sam Smith and Ellen Page also members of the LGBT community.

Wiley has an estimated net worth of $1 million. Her involvement in the movie Being Flynn, TV series Orange is the New Black and by endorsing brands she earned $3 million fortune. Her first bought car is the Chevloret Malibu. Her favorite brand is Jill Stuart which is a popular brand since it's operation from 1988.

Samira is residing in a bungalow with wife Lauren Morelli in California designed by Stefani Stein from Homepolish, a premium interior design service. Their bungalow has a  feminine touch which is a representation of two women living in the house and their importance. They have a  color and pattern infused interior,  balanced out by organic materials like marble, oak and making a base with white crisp walls.

Designer Stein says the house is certainly a dream house as she got to explore the interplay of colors, pattern, and texture. It is said to be their very first adult home so they were very particular about design and stuff.

Wiley married wife Morelli in March 2017 following their long relationship since 2014. They got engaged in 2016. Wiley and Morelli are rumored to have separated but there is no confirmation of it. The couple still has some photos of them posted on their respective Instagram feed so the rumors are probably false. Recently in 2018, she appeared on Ellen Show where she shared about celebrating her one year marriage anniversary which clears out all the speculations about her seperation with wife Morelli.

She has been honored with prestigious mentions like being Out Magazine's Ingenue of the year in 2014 and a year after she was awarded Human Rights Campaign's Visibility Award, the campaign launched to assist the LGBT community. She received an Emmy Award nomination for Outstanding Supporting Actress in a Drama Series for her role in the Hulu series, The Handmaid's Tale.

Here is a video when she came to The Ellen Show.