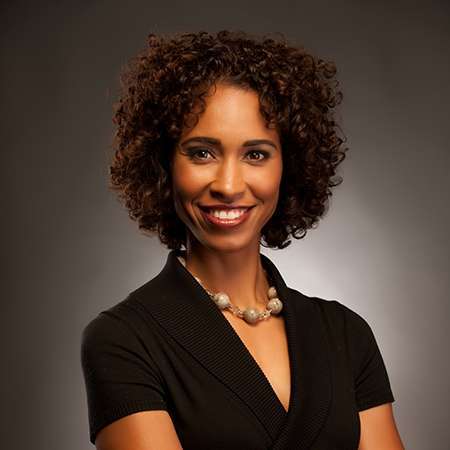 Sage Marie Steele, an American television anchor, is the main host of SportsCenter On The Road. She previously hosted the Saturday and Sunday editions of NBA Countdown on ABC for four seasons from 2013-2017.

Sage Steel was born on November 28, 1972. She is 44 years old and is a daughter of Gary Steele who was the First African-American to play varsity football at a west point during the 1960s.

During her early age, she went to high school in Colorado, Springs, Colorado and Carmel, Indiana. For her higher education, she later graduated from the Indiana University in 1995 with a Bachelor of Science Degree in sports communications. She spent her free time in volunteering.

She volunteers for the Alzheimer's Association events, enjoy horseback riding, and spending time and flirting with her family.

She was a full-time co-host of Sports center for 5 years prior to the NBA a s signment. She has also previously contributed to First Take and Mike & Mike in the morning and has served as a guest co-host of ESPN2's sports nation.

Her first television reporting job was as WSBT-TV at the CBS affiliate in South Bend, Indiana as a news reporter and producer from 1995-1997. After that, she worked at CBS-affiliate WISH-TV in Indianapolis, Indiana from 1997-1998 as the weekend morning sports anchor and weekday reporter.

She worked at the ABC affiliate WFTS in Tampa, Florida from 1998-200, where she was a sports reporter with former WFTS sports director and current Sports center host Jay Crawford.

She worked at Fox Sports Florida as a reporter to cover the teams throughout the central Florida such as The Tampa Bay Buccaneers, Orlando Magic, Tampa Bay Lightning and University of South Florida Bulls.

After that, she worked at Comcast Sportsnet Mid-Atlantic in Bethesda, Maryland where she was an anchor and a reporter for the local sports news program, Sportsnite.

She was one of the original personalities of Comcast Sportsnet network when it launched in 2001. She was the main anchor at CSN Mid-Atlantic (2001-2007).

She also beat the reporter for the Baltimore Ravens. She then joined ESPN and made her first debut on 16 March 2007 on Sports Center, a television show which talks and discusses the latest happenings relating to sports such as Basketball, Football, Cricket, Rugby and much more.

Steele is a married woman. She married to Jonathan Bailey in 1999 and her husband is a former personal trainer at her hometown. She is living happily with her husband ever since 1999. The couple also has three children together.

Steele's current net worth is $1.5 million. She is 5.9 feet tall.  She earns an annual average salary of around $100K which clearly shows her hard work, talent, and determination. She is very kind towards her work and this is the outcome of her hard work.