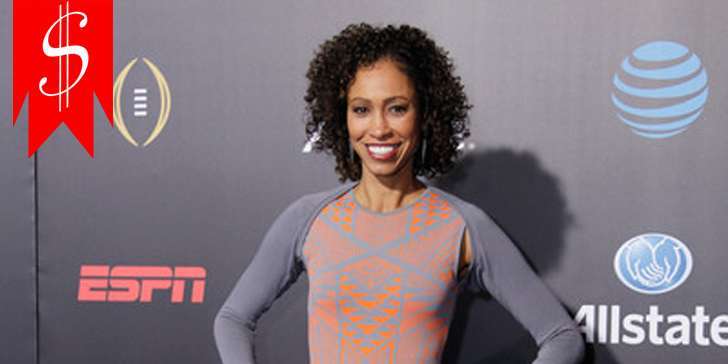 Sage Marie Steele, ESPN’s one of the most vibrant and colorful reporters is an American TV anchor who hosts NBA Countdown, Friday, and Sunday on ABC and ESPN. She earns an annual salary of $400000 and this year her net worth is estimated to be $1.5 million. Steele was a full-time co-host of ESPN’s flagship show SportsCenter 5 years before her NBA assignment.

Being a very experienced anchor of sports news, she completely deserves the amount of her salary and net worth.

Steele who has also been a part of SportsNation on ESPN worked as a sports reporter with WSBT for the first time in 1995 soon after the completion of her graduation.

Sage Steele, who hosted NBA finals in 2012 and 2013, has served ESPN First Take, Mike and Mike in the Morning and SportsNation previously.

After her first work in WSBT-TV, she worked as weekend sports anchor and weekday reporter at WISH-TV in Indianapolis, Indiana in 1997. There she reported Indianapolis Colts, Indianapolis 500, Indiana Pacers and Brickyard 400. She also hosted local college and high school sports.

The Upcoming Co-Host of Miss America Joined ESPN in 2007

Steele joined ESPN in 2007 after working in WFTS in Tampa, Florida in 1998 and Comcast SportsNet Mid-Atlantic in Bethesda, Maryland in 2001. In WFTS, she worked with current SportsCenter host Jay Crawford and covered the teams like Tampa Bay Buccaneers, Tampa Bay Lightning, Orlando Magic and University of South Florida Bulls.

In Comcast SportsNet Mid-Atlantic, she was a reporter for local sports news program, SportsNite. We should get excited to hear that she will be the co-host of Miss America pageant while Chris Harrison will be hosting the show.

Sage married Jonathan Bailey who was a personal trainer before. She met him at the Indiana University and dated for a very long time before marriage and before giving birth to three kids. She was born on November 28, 1972, by the womb of Mona. Mona and Gary also gave birth to her brothers Courtney and Chad, who is the Vice President of Media Relations in NFL's Baltimore Ravens.