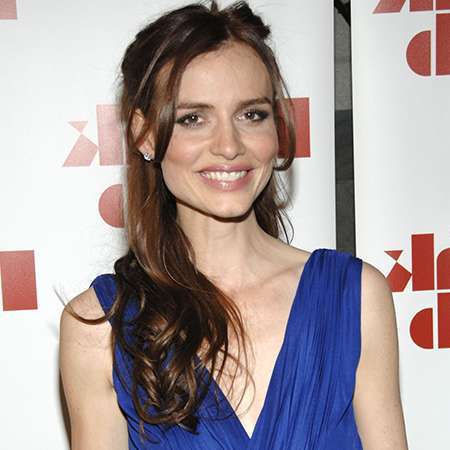 Saffron Domini Burrows is an English actress and model. She has appeared in various films and series including Circle of Friends, Troy, and The Bank Job. She debuted her film career with a small role in Jim Sheridanï¿½s In the Name of the Father in 1993. Burrows has earned nominated for several awards shows including Screen Actors Guild. She currently appears in the season 4 of the web comedy-drama Mozart In the Jungle which appears in the Amazon video.

Saffron Burrows was born on 22 October 1972 in London, England, UK. Both her parents are socialists. She was born to an architect father and mother is a feminist. They both are also academicians. In childhood, she sold the socialist worker newsletter for pocket money.

When she was teen, she did a photoshoot for Covent Garden by the fashion photographer Beth Boldt. After that photo shoot, her modeling career started.

Then, Saffron Burrows modeled in Paris and London for channels, Yves Saint-Laurent and Vivienne Westwood. She made her first film at the age of 17, leaving behind the catwalk.

Her first film debut in 1993 in a small role and her focused roles was in 1995. She appeared in a film In the Name of the father in 1995 and then appeared in other films before working for Reign Over Me.

In 2007, she appeared in a comedy-drama film the Reign Over Me alongside Adam Sandler, Jada Pinkett Smith and Donald Sutherland.

In 2010, she played a Detective Serena Stevens on Law & Order: Criminal Intent. In 2013-14, she joined the ranks of the Marvel Cinematic Universe on the ABC television show Agents of S.H.I.E.L.D where she played the agent Victoria Hand in a recurring role.

Since 2014, she has been appearing on the Amazon Videoï¿½s web comedy-drama the Mozart in the Jungle.

Saffron Burrow's Net Worth And Charity

Saffron Burrowsï¿½ net worth is $10 million, according to the Celebrity Net Worth. She has amassed a huge amount of net worth from her acting career. Her films have grossed over $1 billion at the Box Office.

Burrows is a campaigner for disabled rights and equality. She has also involved in various charitable works and movements.

Saffron Burrows is a married woman. She is married to writer Alison Balian since 2011. They have been together for nine years.

The couple married two months after the Supreme Court passed the Marriage Equality Act in 2011. They have two children together; a son and a daughter. Their son was born in 2010 and daughter was born in January 2017.

Her wife, Alison Balian works for Ellen on her show The Ellen DeGeneres Show. In 2009, Burrows became an American citizen.