Russia V. Saudi Arabia: The Home Team Has More Chance To Win With An Early Goal 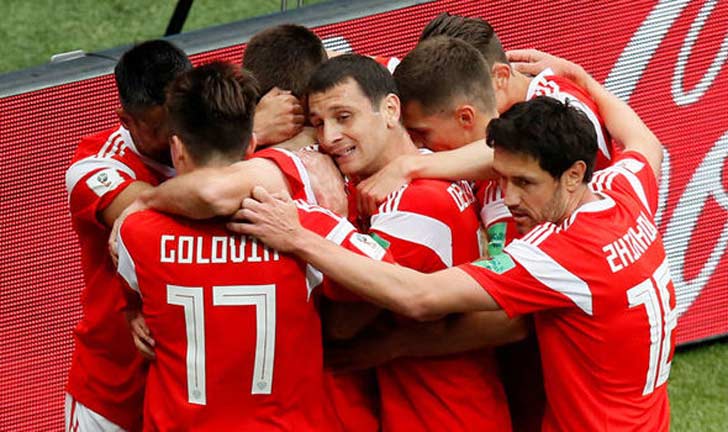 The start of 2018 FIFA World Cup with the host nation, Russia facing Saudi Arabia started with a goal in the 12 minute. Russia's midfielder Yury Gazinsky netted his first international goal converting a cross from A. Golovin.

The opening goal of the #WorldCup goes to the hosts & Yury Gazinsky!

In the first few minutes of the match, Saudi Arabia(green jersey) were dominating but as the match continued, Russians (red jersey) overpowered the game.

In 24 minutes Denis Cheryshev came in for injured Alan Dzagoev. The jersey #6 for Russia is a talented player but can he perform in the biggest stage of football?

Half an hour went and the Russians still playing very well, but both the sides have equal ball possession. So far Russia hit one shot on target which was a goal whereas Saudi hasn't got any chance to shoot at the Russians goal post.

Russia scored the second goal and this time it was the substitute Denis Cheryshev. It is Cheryshev's first international goal as well. The 43rd-minute goal gave the Russians the upper hand over the Saudi side and going into half-time Russia have a comfortable cushion of 2 goals.

With the start of second half, Saudi Arabia has more ball possession, but are still unable to create any chance of scoring a goal. The closest they got to goal is from Mohammed Al Burayk's cross, however, his teammate got inside the D-area a bit late.

Both Russia and Saudi Arabia bring in a fresh pair of legs. For Russia Daler Kuzyaev comes in for Aleksandr Samedov and for Saudi Arabia Fahad Al-Muwallad replaced Abdullah Otayf.

Russia made their final substitution bringing in Artem Dzyuba in place of Fedor Smolov.

Goooooaalll!!! A header by Artem Dzyuba assisted by Aleksandr Golovin. Once again a substitute scored the goal sealing the game for Russia. The goal is followed by an immediate substitution by Saudi Arabia as Al Shehri makes way for Hattan Babhir.

Dzyuba's goal is the quickest goal at a World Cup, scoring just in 89 seconds after coming in since Poland's Marcin Zewlakow against the USA in 2002.

With the match almost coming to an end Saudi Arabia has ball possession of 60% and yet they are 3 goals down. The Saudi squad lacked aggression and played a very defensive game.

The first yellow card of FIFA World Cup was given to Aleksandr Golovin at the 88th minute.

Russia ended the game with a bang scoring the fourth goal in the additional minute. Cheryshev netted his second goal of the match with the assistance of Artem Dzyuba. In 90+3 minutes Saudi Arabia's Taiseer got booked, second of World Cup 2018.

The fifth for Russia scored by Aleksandr Golovin, also his second goal of the match from a direct free kick. It was just a stunner. Russia has shown their dominance though ranked last in the table based on their performance in the friendlies. They sure have showcased their skills and has established themselves as a probable contender for the title. It is also the biggest opening score since the 1994 World Cup.