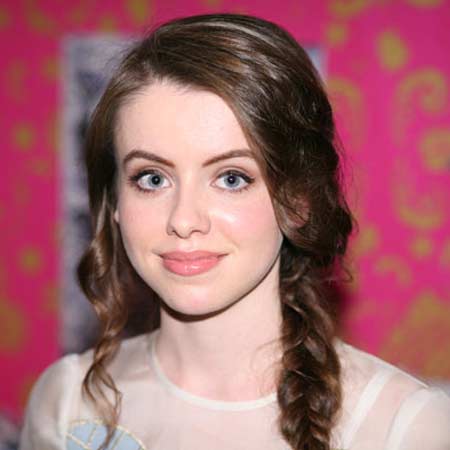 British actress Rosie Day is active in the acting industry since 2004 and is known for roles in the movies Outlander as Mary Hawkins, and All Roads Lead to Rome as Summer. She also worked in several theaters which include Spur of the Moment by Anya Reiss, and Winter's Tale by William Shakespeare. She is also an ambassador of Stem4 a charity that educates on teenage mental health.

Rosie Day was born on 6th March 1995 in Bury, England, UK. She belongs to Caucasian ethnicity and holds British nationality. She has a sister, who is a talented musician.

Day was a really shy kid at school and was into dance, gymnastics, but never thought of acting. Her sister was involved in a BBC series called Hope and Glory at the age of eight. The producer wanted Day to play in the series, but she rejected the role because of her studies.

"I was a really shy kid, but my sister was one of those annoying all singing, all dancing children. My parents took her to stage school and when she was eight she got a part in a BBC series called Hope and Glory. The producers decided they wanted a little sister for her in the show and the casting director came to me and asked me if I would do but I said no. In the end the fact that I’d get to miss school persuaded me to do it. I had no idea what I was doing, and have hardly any memories of actually doing that job now".

Day credits her acting career to her sister. She was the one who inspired her to be an actress and helped her to build up her confidence.  At the age of sixteen, Day dropped out her A-Levels education because of her growing acting career.

"Yeah, I acted all through school and when I was 16-years-old I got a part in a play at The Royal Court, and that was when I got signed by a big agent. I’d started my A-Levels, but there was no way I could be getting jobs filming for four months in Manchester and be in school in Winchester at the same time. So my parents – who are not at all pushy – said I could quit my A-Levels. And I just continued acting from then."

Rosie Day made her television debut in the BBC television drama, Hope, and Glory. The next year, she appeared in two TV series, Black Books, and In Deep. She also played in Summerfolk by Maxim Gorky as Anya at Royal National Theatre, the same year.

Day then made her appearances in number of television drama, Family Affairs, Bernard's Watch, Half Moon Investigations, Summer in Transylvania, Good Night, Holby City, Ironclad: Battle For Blood, whereas her stage credits, Winter's Tale by William Shakespeare, Spur of the Moment by Anya Reiss, and among others.

In 2012, Day made her big screen debuted through the British thriller, The Seasoning House as the lead role of Angel. In the movie, she shares the screen with Kevin Howarth, Sean Pertwee, and many more.

Day then worked in few movies which include Howl, and All Roads Lead to Rome. She also played in several short movies, Traction, Sixteen, Soror, Butterfly Kisses, and many more.

As of 2018, Rosie Day is busy on her two projects which are British animated television miniseries, Watership Down, and upcoming American fantasy drama film, Down a Dark Hall.

According to the Celebrity Net Worth, Rosie Day's net worth is estimated to be around $1.4 million. She is active in the industry since 2004 and has worked in numbers of movies, television series, and theatres which are her main of sources of income.

She also earns a considerable amount of money from several endorsements and advertisements.

Rosie Day is in a relationship with English actor, Luke Roskell. They often post pictures of each other on their respective social media and shares a healthy relationship.

Day has the biggest girl-crush on American actress, producer, and designer, Sarah Jessica Parker. Once, in an interview, Day mentioned that she gets her inspiration from actresses like Kate Winslet, Julie Walters, Helena Bonham-Carter, and Emma Thompson.

Let’s check out the interview of Rosie Day.