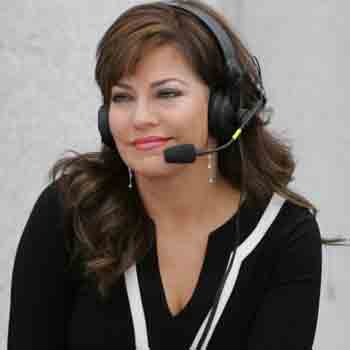 Robin Michelle Meade known as Robin Meade is a current lead news anchor for HLN’s morning show called Morning Express with Robin Meade. She has joined the HLN station in the year 2001. Besides her identity in the journalism sector as a journalist, an anchor, she is also former Miss Ohio and a regional Emmy Award Winner.

Meade is a talented and very beautiful television personality. She is a country singer. She has released her country music album in the years 2011 and 2013 titled Brand New Day and Counts on Me respectively.

Regarding her personal life, Meade is a married woman. She tied the knot to Tim Yeager in 1993.

Robin Meade was born Robin Michele Meade on 21st April 1969 in New London, Ohio under the birth sign Taurus. The lady who is from America has a North American Ethnicity.

Meade is the daughter of Linor Meade and Sharon Meade. She grew up along with her brother Kevin Meade and sister Tonda Meade.

Meade attended New London High School. During her school days, she was a cheerleader and also use to play the piano. She then went to Malone University and Ashland University where she majored in radio/ television production, programming and performance and has minored in political science.

In 1992, Meade won the title of Miss Ohio and later became the top ten finalists in the Miss America pageant.

Robin Meade stepped into the field of journalism as a reporter working for WMFD-TV in Ohio. She then worked as a reporter and an anchor at WCMH-TV and at WJW-TV, the local stations.  Later she began to host the morning news show Today in Florida at WSVN-TV based in Miami, Florida. She also served in the station as a noon anchor and also as a health reporter. Afterward, she worked at NBC Chicago affiliate WMAQ-TV as the morning newscaster and also co-anchored the weekend news show.

I was honored to have the Six-String Soldiers back in the studio this week for #armedforcesweek. They are always a favorite of mine. To all those who serve and have served, thank you. We salute you!

Meade also worked in the station as a general a s signment correspondent. During the time, she had also covered the 1996 Olympics which also include reporting on the Centennial Olympic Park bombing.

In 2001, Meade joined the HLN (formerly known as CNN Headline News) station and for it, she has covered the news related to Operation Enduring Freedom, Operation Iraq Freedom, etc. She appeared on the Oprah Winfrey Network show Ask Oprah’s All-Star along with Dr. Phil McGraw, Suze Orman, and Dr. Mehmet Oz in 2011.

Besides, she published a ''non-fiction / motivational / inspirational / how-to / autobiographical book'', How to Radiate Confidence and Feel IT Too on 10th September 2009.  The book became one of the best-selling books in New York.

She also released a single, Dirty Laundry from the album, Brand New Day.

Robin Meade won an Emmy Award for her efforts in covering the 1995 collision between a school bus and train in Illinois where seven were killed and 24 teenagers were injured.

Lycon listed Meade as one of the top 20 most popular TV news personalities in 2002. Two years later, Playboy.com was also recognized as Sexiest News Caster.

Robin Meade's Net worth And Salary

The 50 years old, Robin Meade's net worth is $8 million at present. She has earned a huge amount of salary from her career. He earned an annual salary of $3 million from his work.

Robin Meade has also set an image of the author as she had published her book in 2009 titled Morning sunshine: How to Radiate Confidence and Feel it too which costs $6.45 in Kindle, $4.94 in Paperback.

She became a part of the CNN family and eventually CNN Headline News. Her perky personality and attractive looks caused a poll on Playboy.com to vote her as Sexiest Newscaster.

Her beauty and talent are very much admired by her fans. She is an in-demand journalist on the news stations. She enjoys a high net worth of $4.5 million and enjoys an annual salary of $ 750,000.

Meade is fond of LAMB shoes and has a collection of LAMB shoes. Besides, she is a traveling freak and frequently travels to several eye-catching and luxury places.

The 5 feet 3 inches tall, Robin Meade is a married woman. She got married in the year 1993 November to Tim Yeager after a long time of dating relationship. She is living in Atlanta, Georgia with her husband with a cat, and two dogs.

The couple is together for years but has no children yet. The couple is maintaining a healthy relationship without any divorce and extra-marital affairs.

In the year 2018, she has a serious eye infection which is called cornea infection. At that time she took off for some weeks from her work to recover from it.

Robin Meade stands height of five feet and three inches tall. Her body weight is 54 kg. Meade has an amazingly hot body. She is a model. Her body measures size 37-25-36 inches.

Meades has an amazing fan following on her social media. She has over 87.2k followers on her Instagram.