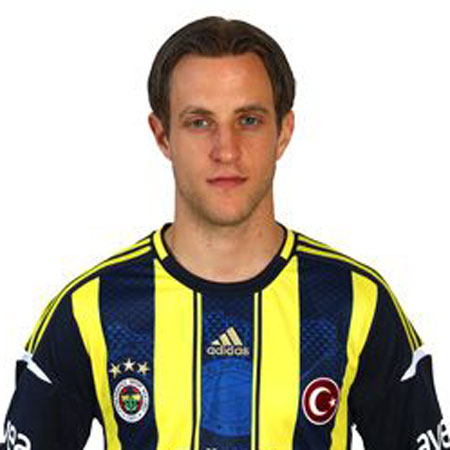 Reto Pirmin Ziegler, commonly known as Reto Ziegler is a Switzerland international defender. This Swiss left back was born on 16th January 1986. He was born in Geneva, Switzerland. Ziegler plays with his No.86 jersey for his current team Sassuolo and nation Switzerland. This 28 years old left back is currently on load from the other Serie A side Juventus. So far, he has unveiled himself on the turf of six different countries and their top-flight football till the date. He has 32 international caps in his name. Ziegler was also in the 23 man Swiss squad.

Ziegler’s early career took into action from Zurich based club Grasshopper. He was with the club till 2004. He was then signed by the English club Tottenham Hotspur in September 1 in 2004 at the price of 1 million Euros. Ziegler made mark from his very early age. He made debut in the Totteham first team at the early age of 18. He was initially featured in left midfield and was alternately pushed back in exchange of position with Timothee Atouba. Ziegler made total of 31 appearances for Tottenham. He moved to Hamburg SV on loan in August 1, 2005. With the Bundesliga side, he made 8 league appearances and 3 UEFA Cup appearances. Upon his return from German club, he was loaned out to Wigan Athletic in January 2, 2006. He made total of 10 appearances for Wigan. He was again loaned to Italian side Sampdoria in 2007. During his loan stay, he made 15 appearances and scored 1 goal. His role was felt significant at the club, so he was signed by the very club in June 1, 2007 at the price of 2 million Euros. He stayed at the club till 2011 before moving to Juventus in 2011 as a free transfer. He made 127 appearances for the club as a full contract player.  Failing to make to the first team at Juventus, he was loaned out to Fenerbahce on 31 August 2011. At the end of the spell with the Turkish club, he was again loaned out to Russian club FC Lokomotic Moscow in September 6, 2012. Feeling his need, Fenerbahce retained him on loan spell in January 21, 2013. He was then subject to loan at Sassuolo. He has recently made return to his primary club, Juventus.

Zeigler started his international career from Swiss U17 squad. He was part of 2002 U-17 European Championships winning team. He made his senior debut for Switzerland national football team on March 2005. It was 2006 FIFA World Cup qualification game against France. The match ended 0-0 draw. The match was contested at Stade de France. He made two more caps for Swiss side further but failed to make it through to the squad for the finals of the 2006 FIFA World Cup. He had significant role in pushing Switzerland through to the play-off round of the 2009 UEFA European Under 21 Championship. He made his first senior goal on 19 November 2008 in the match against Finland.

Reto Ziegler has numbers of honors and achievements in his name. During his stay at Grasshopper, the club was finalist in saison 2003/2004. During his loan spell at German Bundesliga side Hamburg SV, he won UEFA Intertoto Cup in 2005. His Wigan stay drew him till the final of Football League Cup in 2006. His Sampdoria stay saw him to the final of Coppa Italia in 2008-09. During his loan spells at Fenerbahce, he won Turkish Cup in 2011-12 and 2012-13. He was part of UEFA U-17 European Champion squad of 2002. In his short stay with primary club, he came across Supercoppa Italiana in 2012.

Reto Ziegler has a brother whose name is Ronald. He is also a professional footballer and plays for Swiss club ES FC Malley. His relationship status still remains undisclosed. It seems the player doesn’t want his personal life to be talked about.

This 28 years old Defender stands 1.83 m tall in height and has weight of 80 kg. His accounted salary is 1 million Euro per annum.