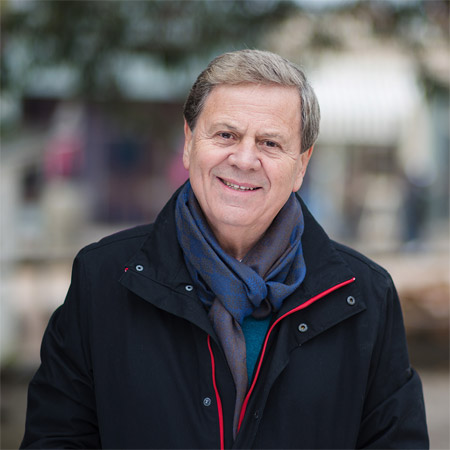 Raymond George Martin who was born as Raymond George Grace is a famous Australian television journalist who is famous for his work on Channel Nine from 1978 especially his talk show 'The Midday Show'.

Ray Martin was born in Richmond, New South Wales, Australia. He was born on 20 December 1944 as Raymond George "Ray" Martin. This 74 years old celebrity was raised in his homeland along with his family. Martin belongs to an Irish-Australian Catholic family.

Martin grew up as the youngest child among four kids and all of her siblings are sisters. His parents separated in 1955 but they never divorce.

Martin's nationality is Australian and his ethnicity is White. Martin is the only son among his parent's four children and is the youngest. Martin attended Launceston College and the University of Sydney where he studied engineering on scholarship. Later in 1967, he graduated with a Bachelor of Arts.

Ray Martin started his broadcasting career working for Australian Broadcasting Corporation (ABC) as a cadet in Sydney in 1965. Later in 1969, he was appointed as the ABC's New York City correspondent. During his ten year career, he presented several stories like anti-Vietnam War protests, presidential elections, the Olympic Games and several current news affairs and news.

Martin moved to the Nine Network and worked along with the reporters Ian Leslie and George Negus to launch 60 minutes. In 1985, Martin presented show Midday with Ray Martin and hosted top-rating specials.

Later in 2005, he was made Nine Network's Senior Reporter and he covered sports events like World Cup Cricket and Commonwealth games. He was replaced by Tracy Grimshaw on A Current Affair in 2006.

Martin replaced Ross Greenwood in September 2007. In 2008, Martin left Nine Network due to the time slot and differences with management over budget.

After his Nine Network career, he led the official broadcast of the World Youth Day. In 2014, he joined the SBS series and started working as the presenter of First Contact. Martin was also featured in the SBS Australian version of the popular international doc u mentary Who Do You Think You Are?.

Ray Martin is a married man he married his girlfriend Dianne Martin in a private marriage ceremony. Martin has been in long-married relations with his current wife and has two children, a daughter named Jenna Martin and a son named Luke Martin.

Martin currently lives in Sydney, Australia along with his family. Martin has authored many books some of his famous books are 99 Critical Shots in Pool, Ray Martin's World, Spartadia: A Battle Plan for Today's Business and several others.

Ray Martin might have the net worth of a few million dollars and his salary is under review. Martin has been followed by thousands of his fans on Twitter and Instagram. He is available on Twitter with id Ray Martin (@RayMartin).