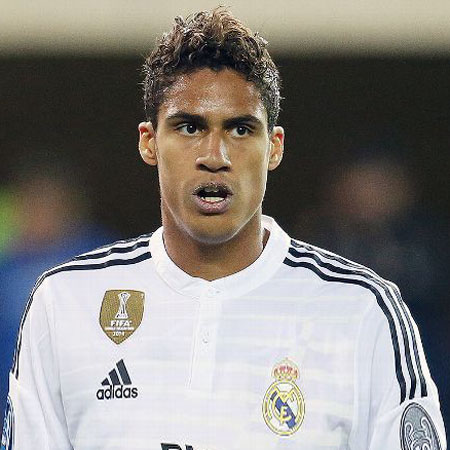 Rafael Varane is the name of a young French professional footballer. Born in 1993 April 25 at Lille, France, he cherishes the height of 191 cm and has the body weight of 76 kg. He is in the current team of Spanish Club Real Madrid from squad No.2. He also plays in the Team of France National Football Team as a Defender. Rafael Varane is 21 years old. He is in a relation with his childhood friend, who is a law student, named Camille Tytgat.

Varane started his football career at the age of seven in 2000. Varane joined the native Football Club called Hellemmes and began to enhance his football skills. After spending two years at this club, he joined with the professional club called RC Lens in 2002. He spent 8 years at Lens. For the development of his football skills, during the time period, he used to spend his weekdays at the Centre de Preformation de Football in nearby Lievin and his weekends, playing with Lens.

After returning full time to Lens, he was quickly promoted into the club’s youth ranks in 2008. He played on under-16 team of Lens in the 2008/2009 season. In the following seasons, he was promoted to club’s under-19 team. From the season 2010/2011, he signed his first professional contract with Lens. He appeared in 23 matches with two prominent goals for the team. In 2011, Varane signed the six year contract with the Spanish Club Real Madrid after passing through the medical. Varane showed his talents with the good performance in the matches which impressed many people and he became one of the players to be praised in the team. After his arrival in the team, Real won the La Liga, Copa del Rey, Supercopa de Espana and UEFA Champions League.

Varane is in the National Football Team of France since 2010 being under-18, 20 and 21 Teams. He was promoted to the first team of France National Football Team in 2013. He has appeared in 5 cap matches from this team. According to the 2012 Salary statistical record, his Salary is recorded to be 1.2 million Euros. His current market value is 2.5 million Euros and Mondial Sport Management and Consulting Sarl is the name of his agent.

Varane is a versatile and talented player. His main position is Defense-Centre back but can play well as Defensive midfielder and as a right back. He has combined his youth with his skills. He is widely admired footballer. He is seen as one of the promising young players today. He has good technique and tactics in the pitch. His height favors him on headers and aerial duels. He has good stamina and strength giving him speed and durability in the game. He has been compared with different renowned players for his performance and work rate.