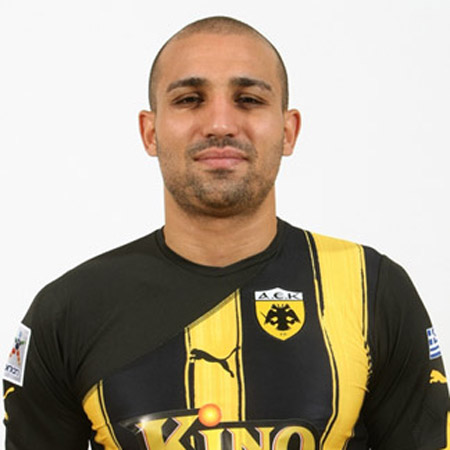 Algerian footballer who is nicknamed “The Terrorist”, Rafik Zoheir Djebbour plays for his nation Algeria and also for his current team Nottingham Forest. Rafik had a crucial role in qualifying his nation Algeria to the World Cup and made an appearance in 2010 FIFA World Cup. Rafik has an unparalleled knack of terrorizing defenses and delivering machine gun goal.

Rafik Djebbour was born on March 8 1984 in Grenoble, France and was so keen on playing football that at the tender age of 15, he was signed to AJ Auxerre’s youth academy before being moved to the senior team in 2003. Rafik started his professional football career at the age of 19. After that on July 1 2004 Rafik was freely transferred to R.A.A Louvieroise club located in La Louviere, Hainaut where he appeared in 21 matches and delivered six goals .Later on due to some dispute and dissatisfaction Rafik made a free transfer to Ethnikos Asteras F.C based in Kaisariani, Athens, Greece on July 1 2005.Rafik scored 11 goals in 21 appearances which advanced him a move to Atromitos Football Club in Peristeri on January 2006 with a transfer fee of seventy thousand pounds. Rafik managed to deliver six goals but unfortunately suffered an injury due to which his appearances were limited to two without a single goal. Rafik made his debut with the Algerian national football team in August 2006 in a friendly match against Istres and Gabon. On January 1 2007 Rafik was transferred to Panionios with a transfer fee of 167 million pounds. Rafik scored 21 goals in 47 matches in the two Super leagues Greece. Rafik made his first international goal for his national team in a game against Liberia on 6 June 2008.

On July 1 2008 Rafik was transferred to Athelitiki Enosis Konstantinoupoleos (AEK) based in Athens with fees of 255 million pound. In 2009 again Rafik made 6 appearances and delivered 2 goals for his national football team. While in AEK Rafik was under many controversies but he appeared in 74 matches and delivered 27 goals. Due to various clashes Rafik requested to be released by AEK on a free transfer and later even threatened AEK to bring the matter to court. On 14 January 2011 the matter was settled Rafik was released.

Rafik Djebbour was later freely transferred to Olympiacos signing a 6-month contract. He scored his first goal for the team in a win at Aris which was followed by two goals in a win against AEK with 6-0. Rafik’s stay in Olympiacos extended till September 6 2013. During his stay Rafik took part in 2010-11-12-13 Super league Greece win where he gave as many as thirty nine goals. Rafik’s first European goal for Olympiacos came in a Champions League home win (3-1) against Borussia Dortmund and Rafik’s second win against Arsenal in a champions League home game. While in Olympiacos he also played in the Greece Cup 2011-2012 and 2012-13.In both 2012 and 2013 Rafik played for his national team but altogether delivered one goal. On September 6 2013 under a loan Rafik was transferred to Siva s spor. He played 13 games and scored 4 goals. Then finally the loan ended on January 20 2014.

Soon after, on January 26 2014 Rafik was transferred to his Current team Nottingham Forest for the transfer fee of hundred and thirty two million pound. Rafik with a height of 185 cm and weight of 77 kg helped to qualify his nation Algeria to 2010 FIFA World Cup. Although his salary is unknown Rafik’s current market value is 220 million pound. Rafik recently played the 2013-2014 season of championship league and delivered a single goal. Rafik’s main position is center forward and secondary position is left wing and right wing. There have been certain rumors that Rafik’s prior club AEK is interested in bringing him in again.