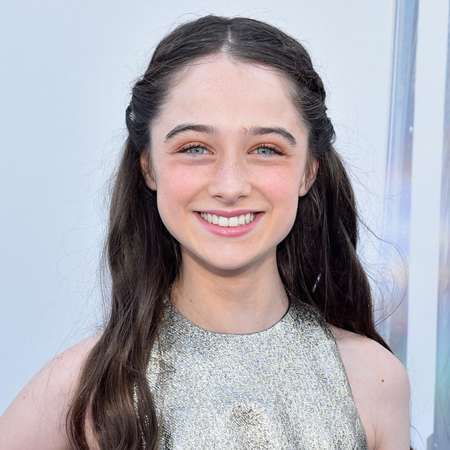 Raffey Cassidy is a young English actress. She is best known for her roles as young Snow in Snow White and the Huntsman (2012). She was named on Screen International magazine's Stars of Tomorrow.

Raffey Cassidy was born on 30 August 2002. She was born in Worsley, near Manchester, England. She is currently a pupil of Moorside High School in Swinton. Her father is Simon Cassidy.  She has two older sisters: Grace and Mossie Cassidy and an elder brother Finney Cassidy.

All her siblings are also actors, but not as famous as her. She is a charming freckled girl with brown hair and beautiful bright blue eyes. She has a closely knit family who travels along together everywhere they go. As well as having an interest in acting, Raffey also loves doing gymnastics and also dancing.

Cassidy is a rising star with unique talent and enthusiastic personality. Her personality has gotten her both fame and support from her fans.

Raffey Cassidy’s acting career started at the age of seven. In an interview, she stated that her brother had an audition and she was accompanying him. While waiting outside, they said they needed a little girl and she accepted the offer.

Cassidy first starred in a TV show “Spanish Flu: The Forgotten Fallen” in 2009 as Ellen. She then starred in various TV shows: 32 Brinkburn Street in 2011 as Nora, Stepping Up in 2012 as Freya and Mr. Selfridge in 2013 as Beatrice.

Cassidy has also played in numerous movies: “Dark Shadows” as Young Angelique Bouchard, “Snow White and the Huntsman” as young Snow White in 2012, “The Beast” as Mia in 2013, “Molly Moon: The Incredible Hypnotist” as Molly Moon in 2015.

In the same year, she perfectly embodied the wonderfully complex character, Athena, in “Tomorrowland”, a sci-fi adventure film. In the feature film, she did most of her own incredible stunts rather than her stunt double. She spent two months training in gymnastics, swimming, and martial arts.

Cassidy also spread a message to people of her generation: The future is what we make of it. In the movie, she not only played as a future character but proved that she herself is the future of the movie industry. She also played in “Rust”, a short film as Georgie in the same year.

Throughout her acting career, she has worked with many famous actors and celebrities such as George Clooney, Hugh Laurie, Britt Robertson, Johnny Depp, Jeremy Piven, Tim Burton and much more. In 2013, she was named on Screen International Magazine’s Stars of Tomorrow and is the youngest actor to be featured on the annual list.

For her role in Tomorrowland, Raffey was tutored by her Manchester drama teacher David Johnson of David Johnson Drama. She has been attending the drama school for two years and she will appear in their production of Hanky Park next month.

Cassidy has received many positive comments and praises from various co-workers. Clooney also gifted her a diamond bracelet. She also makes short movies, some of them being “Miranda’s Letter”, “The Heist before Christmas” and “Rust”.

It is rumored that Raffey will be taking the role of Anna Vatan in “Allied”, a new feature film movie set to be released on 23 November 2016.

Since Raffey is a growing teenager, her exact measurements are not constant and exact. She has an approximate height of 5 feet and a weight of 50kg. Her net worth and salary is also currently unknown. More detailed information about her can be found on several social networking sites. You can also find lots of images, photos and gifs of her in tumblr.