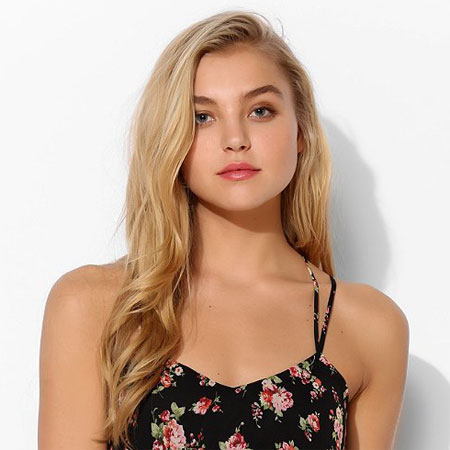 Rachel Hilbert is an American model who is best known for being the official spokesmodel for Victoria's Secret younger line, PINK, and Kohls. She has been also been featured in international editions of several magazines, like Cosmopolitan, Elle and Marie Claire.

Rachel Hilbert was born on March 14, 1995, in Rochester, New York. She holds American nationality and belongs to white ethnicity.

Rachel Hilbert spent her childhood in Webster, New York. She is the daughter of Tiffany Hilbert and Chuck Hilbert. She began her modeling from a very young age. She modeled locally until her mother took her to New York City to meet with many agencies over spring break during her sophomore year.

Rachel Hilbert graduated from Webster Thomas High School in 2013. There she was a competitive skier and dancer. She looks like a cross between Miranda Kerr and Cameron Diaz- is a retired ruthless skier and dancer.

The 24-year-old blonde beauty, Rachel Hilbert featured in one episode of the TV series Younger in 2015. There she played a small role alongside Nico Tortorella, Hilary Duff, and Sutton Foster. She had hosted a Spring Break event for PINK with Gigi Hadid and Cody Simpson in the same year.

Rachel Hilbert also played the role of the nurse in Brett Eldredge's Lose My Mind music Video. She began doing in-house shoots for PINK when she was 18. She aspires to do TV hostings, such as Hadid at the American Music Awards or Heidi Klum on Project Runway. In 2015, Rachel Hilbert also appeared on Hilary Duff's TV Land series named Younger.

Hilbert has been working as the official spokesmodel for Victoria's Secret's younger line, PINK since fall 2015. Besides, she also walked in the Victoria's Secret Fashion Show in that December.

Rachel Hilbert is unmarried. However, she has been in a healthy relationship with American singer-songwriter Brett Eldredge since 2015. She met her boyfriend when she played the role of a nurse in his Lose My Mind music video. Eldredge is an American country music singer, songwriter, and record producer.

Previously, Rachel Hilbert dated Cody Simpson, an Australian singer, songwriter, musician, dancer, and actor from Gold Coast, Queensland. However, nothing more about their relationship is known by far.

Rachel Hilbert started pursuing a modeling career after her graduation in 2013. In the short span of her career, she is already an established model. As of 2019, Rachel Hilbert has an estimated net worth of $800k. She has primarily accumulated her wealth from her modeling career.

Besides, Hilbert also earns well from her social media and her appearances on TV shows. Standing at a tall height of five feet ten inches or 1.78 m, Hilbert sees a bright modeling future ahead.

Rachel Hilbert has a very attractive hourglass figure with a body measurement of 33-23-35 inches. She also looks very hot and beautiful with her dimples and blue eyes.