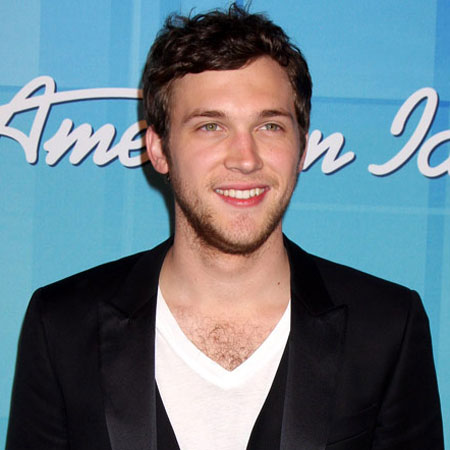 American Idol, season 11 winner, Phillip Phillips is a popular American singer and songwriter. His coronation song, 'Home' is his debut single which he released after his win. In 2012, he debuted his album, The World from the Side of the Moon. He has two other albums, Behind the Light and Collateral. He acted in an episode of Hawaii Five-0. Phillips has earned millions from his career as a musician.

Phillips is married to his longtime girlfriend, Hannah Blackwell. The couple has no children yet.

Phillip Phillips was born Phillip LaDon Phillips Jr. on 20th September 1990 in Albany, Georgia. He is American as per nationality and belongs to White ethnic group. His parents, Phillip LaDon ‘’Donnie’’ Phillips, Sr. and Sheryl raised him with his two sisters, LaDonna Uric and Lacey Neil. When Phillips was 12, he along with his family moved to Leesburg, Georgia.

Phillips attended Lee County High School. He graduated majoring in Industrial Systems Technology from Albany Technical College but could not attend the graduation ceremony due to his obligations to American Idol. When he was young, he used to work at his family’s pawn shop.

At the age of 14, Phillips started playing guitar. His long-time friend and brother-in-law, Benjamin Neil guided him to pursue a career in music. In 2009, he along with Neil and Todd Urick, his other brother-in-law formed the Phillip Phillips band and performed in various events and local venues.

Phillips gave an audition for American Idol, season 11 in Savannah, Georgia where he sang Stevie Wonder’s Superstition. He then performed Thriller by Michael Jackson before the judges Randy Jackson, Jennifer Lopez and Steven Tyler as they asked him to sing a second song. On the show, Phillips’s style was compared to Dave Matthews.

He was taken to the doctor for possible kidney stone after the top 13 performance night. He underwent eight procedures and considered quitting the show due to the pain. But he made it to the end and won the show competing against fellow finalist Jessica Sanchez with recording breaking 132 million votes.

In the finale, he sang his debut single, Home, his coronation song. The single hit #10 on Billboard Hot 100 and sold millions of copies.

After winning the title of American Idol, season 11, Phillips went on the American Idol LIVE Tour with the top 10 contestants of the show. He also performed on various shows including- The Today Show, Good Morning America Concert Series, Jimmy Kimmel Live!, Late Show with David Letterman, Live With Kelly and The Tonight Show With Jay Leno among others.

On 9th November 2012, Phillips released his debut album, The World from the Side of the Moon produced by Gregg Wattenberg. The album hit #4 on the Billboard 200 and was certified Platinum by RIAA in 2013. The same year, he appeared on the cover of Billboard magazine with Jimmy Iovine, Interscope Records founder & CEO and American Idol mentor. He then toured North America as the opening act for Matchbox Twenty.

On 19th May 2014, Phillips released his second studio album, Behind the Light. The album’s debut single, Ranging Fire was released on March 3, 2014. The same year, he received a BMI Pop Music Song Writing Awards for the single. The album hit #7 on US Billboard 200.

In summer of 2014, Phillips toured with O.A.R (of a Revolution), American band. A year later, he filed a lawsuit against his label 19 Recordings, calling the producers oppressive and manipulating. In 2017, he settled the dispute with the producers.

On 7th April 2016, Phillips returned to the stage of American Idol for the finale series. On the finale, he gave tribute to David Bowie with four other White Guy with Guitar (WGWG) winners Kris Allen, Lee Dewyze, Nick Fradiani and David Cook.

Simon Cowell, the former American Idol judge, mentioned Phillips was the only contestant he liked after he left the show. On 17th June 2016, he co-leaded the tour at San Diego County Fair with Matt Nathanson.

On 19th January 2018, Phillips released his third and latest studio album, Collateral produced by Ryan Hadlock. From the beginning of February to April, he launched The Magnetic Tour to support his album.

Along with singing, Phillips also appeared in an episode of TV series, Hawaii Five-0 in January 2018. He shared the screen with Scott Caan, Alex O’Loughlin, Grace Park, Daniel Dae Kim and Masi Oka among others.

Phillip Phillips has an estimated net worth of $3.5 million. He earns much from his songs and albums sales:

As per some sources, American Idol winner gets $1 million in prize money.

His parents filed for Chapter 7 bankruptcy in Georgia Federal Court in September 2015. His parents had $290,445 assets but owed $304,295 to their creditors. His parents’ debts include:

In 2012, following his lawsuit against 19 Recordings, the producers of 19 also filed $6 million lawsuits against him for allegedly breaching the contract and holding the money. Later, they made a settlement but the term of the agreement was not made public.

Phillips is a supporter of various organizations like- National Park Foundation, NCIRE- the Veterans Health Research Institute, and Save The Music Foundations among others. He helped to raise fund for organizations including- Gibson flood relief campaigns and Sarah foundations through his talent. He has been an ambassador for Brave Beginning.

On 24th October 2012, he raised funds for Hurricane Sandy affected people with the PS22 chorus from a concert.

Phillip Phillips married his longtime girlfriend, Hannah Blackwell on 24th October 2015 at the Resora Plantation in Albany, Georgia. The ceremony was attended by almost 250 guests including families and close friends.

The couple met for the first time in 2008 at an event for his sister’s charity organization, Mission Change. Phillips opened up about his relationship with his current wife to Ryan Seacrest, American Idol anchor after the show’s finale. On 26th December 2014, the couple announced their engagement via social media. He wrote on his facebook,

Whereas, his wife showed off her engagement ring on her Instagram with a caption,

The couple is living happily together. Even after years of their marriage, they have no children yet.

During the American Idol, he suffered from a congenital kidney condition which produces stones. He underwent several surgeries and procedures. Soon after the show, he had the kidney stones removed and also underwent reconstructive surgery on his kidneys.

Below, the video is about Phillips' interview: