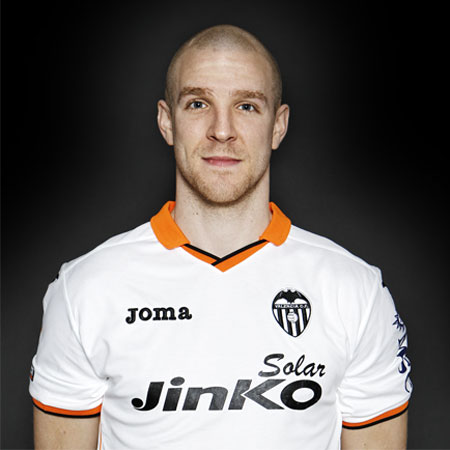 Philippe Sylvain Senderos is a Swiss footballer born on 14 February 1985. He currently plays for Valenica CF in La Liga and also is the Switzerland national team. He has formerly played for Servette, Arsenal, Milan, Everton and Fulham. Zorica Novakovic Senderos(Serbian) and Julian Senderos(Spanish) are his parents. He doesnot have many siblings but the one he has, Hulien Senderos is a national level basketball player.

Senderos started his youth career at Swiss club Servette. He became a regular after few performances. He scored his first goal; he scored a brace on 27 July 2002 in a 2-0 win against Luzern. Though he signed for Arsenal in December of 2002, he played for Servette until the next summer. He could not make a smooth start at Arsenal because he suffered from back problems for six weeks and a fractured bone on his foot. He was left out for the whole season. Senderos made his debut in the League Cup in the 2004-05 season in a 2-1 victory over Manchester United. He scored his first goal for Arsenal during the 2005-06 season in a 2-1 lost match against West Bromwich Albion. He was loaned to A.C. Milan on a season long loan in August 2008. He could not make his move permanent at Milan despite very much wanting it and so he returned to Arsenal after 14 appearances. During the 2009-10 season, he made only 2 appearances for Arsenal in the League Cup and was loaned to Everton in January 2010 for rest of the season. He made three appearances for Everton and returned to Arsenal at the end of Season. Senderos was free transferred to Fulham in a three year contract in June of 2010. On August he had to undergo a surgery and had to keep out for six months. Finally on 30 April 2011, he made his debut for Fulham against Sunderland. He was permanently transferred to Valencia CF from Fulham on 31 January 2014. He made his first appearance for Valencia on 8 February 2014 in La Liga in a 5-0 win against Real Betis. He scored his first goal for Valencia on 13 March 2014 against Bulgarian champions Ludogorets Razgard in the first leg of UEFA ‘Round of 8’. The match was 3-0 win for Valencia. Apart from his club career, he plays for his nation Switzerland. Senderos was the captain of the Swiss under-17 team that saw victory at the 2002 U-17 European Championships. He made his full swing international debut against France in March 2005; the match was 0-0 draw. He was a part of the Switzerland national team in 2010 FIFA World Cup until he picked up an injury.

Being the good guy he is, he married his Iranian girlfriend named Sara. Senderos can speak six languages. He wears No.4 shirt and plays as a defender for his current team Valencia. His height is 1.88m  and his weight is 82 kg. He has an annual salary of 1,665,000 Euros and his market value is worth 25,000,000 Euros.