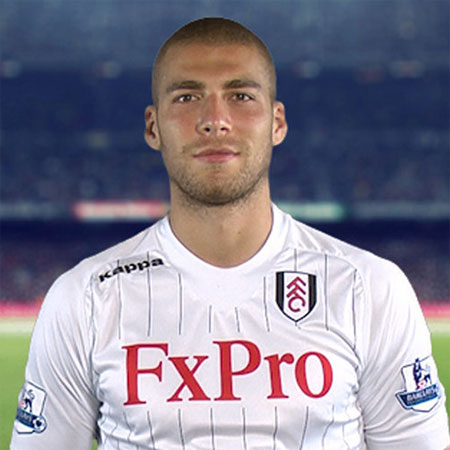 A professional football player born on 2 June 1992 in Struga, Macedonia Pajtim Kasami is a Swiss footballer who is currently playing for English club Fulham.

Kasami began his career with Swiss club Winterthur in 2003 and then in 2006 he joined Grasshoppers. He played briefly for Liverpool in the same year he joined Grasshoppers. He played for Italian Serie A side Lazio, Kasami had moved in the team on 2 February 2009 aged 16. He moved to Switzerland in December 2009 to play for Bellinzona and signed a contract for till 2011. this move was a free transfer from Lazio. His contract with Lazio was terminated by the club itself due to Kasami’s disciplinary issues. He was signed by Palermo ina fiver year contract on 7 June 2010. He was at once taken in the first team. Kasami debuted against Maribor in the first leg of 2010-11 UEFA Europa League play-off, he entered as a second half substitute. On 30 August he made his Serie A debut against Cagliari. The match was 0-0 draw. His season concluded with 24 appearances in total, 14 in the league, 2 in the Coppa Iatlia and 8 Europa League appearances.  Kasami was signed by Fulham on 25 July 2011 on a four-year deal; the transfer fee was not disclosed although it is estimated to be around £ 5 million. he made his debut for Fulham against RNK Split as a late substitute in the Europa League.the match finished 0-0 draw. Kasami made his Premier League debut against Wolverhampton Wanderers on 21 August 2011. The match was a 2-0 loss for Fulham. he was loaned to Luzern on 15th Feb 2013till the end of 2012-13 season. He debuted for the club on 24 February 2013 in a 4-0 win against St.Gallen. On 1st June 2013 i.e. during the final game of 2012-13 season, Kasami scored his first goal for the club in a 4-3 victory against Servette FC. After the loan season ended he had to cut f=of his wage by 50% to stay in Fulham. He performed better than proving his claim to the place in the club. He scored in the Fulham’s 1-0 win against Sunderland in the 2013-14 premier League season. His second goal in the season was against Crystal Palace. He scored third time in the season and it was against Norwich. Kasami was in the Swiss U-17 team that went on to win the 2009 World Cup. He made his U-21 debut for his nation against Georgia U-21 IN 2010. He represented Switzerland as a part of U-23 Swiss team at the 2012 Summer.

His romantic life details about girlfriends is not made public and we totally understand his respect for privacy but hey! Only the name would not hurt. Kasami, only 21 years old plays for his current team Fulham as a Midfielder wearing a No.8 shirt. He is a well built player with a height of 1.88m and weight of 88kg.