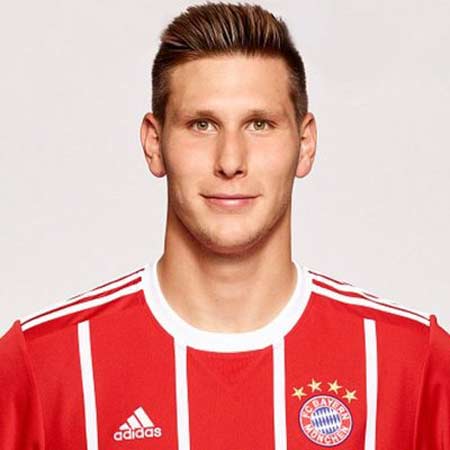 The German professional footballer Niklas Sule rose to fame following his move to German sports club Bayern Munich where he plays as a center back. He started his career with Rot-Weiß Walldorf followed by Eintracht Frankfurt, SV Darmstadt 98, 1899 Hoffenheim and then signed a contract with FC Bayern Munich in January 2017. After playing for several German youth teams, he represented German national team in the 2016 Summer Olympics.

Niklas Sule was born in Frankfurt, Germany, on 3 September 1995 to Georg Sule. He belongs to German nationality and ethnicity wise; he is a Caucasian.

Sule started playing for local youth club Rot-Weiß Walldorf at the age of 11. Soon after that, he made his move to German Sports club Eintracht Frankfurt and played until the end of the 2008-09 season.

Durig his youth career, Sule also played for SV Darmstadt 98 and 1899 Hoffenheim. He made his debut for Hoffenheim in a game against Hamburger SV on 11 May 2013. His career with the club ended in 2017 scoring 7-goals in 107 appearances for the club.

In the year 2017, the footballer made his transfer to Bayern Munich and earned his first appearance for the club playing against Bayer 04 Leverkusen on 18 August scoring the first goal of the 2017–18 Bundesliga season.

Niklas Sule has represented his nation at the U16, U18, U19, U20, U21 levels, including 2012 UEFA European Under-17 Football Championship. He was also a part of German national football team in the 2016 Summer Olympics where their team won the silver medal.

Niklas Sule will represent Germany in the 2018 FIFA World Cup in Russia.

Niklas Sule has earned a lot of money from his professional career. Though the exact amount of his net worth is yet to be disclosed it is believed to be more than $2 million which he made mainly through club salaries and various endorsement deals.

Niklas Sule is not married yet, but he is in a relationship with longtime girlfriend, Melissa. It was reported that the two started dating in the year 2014.

It's been around four-year, the duo's relationship is going stronger than ever. He is also active on Instagram with over 350k+ followers.