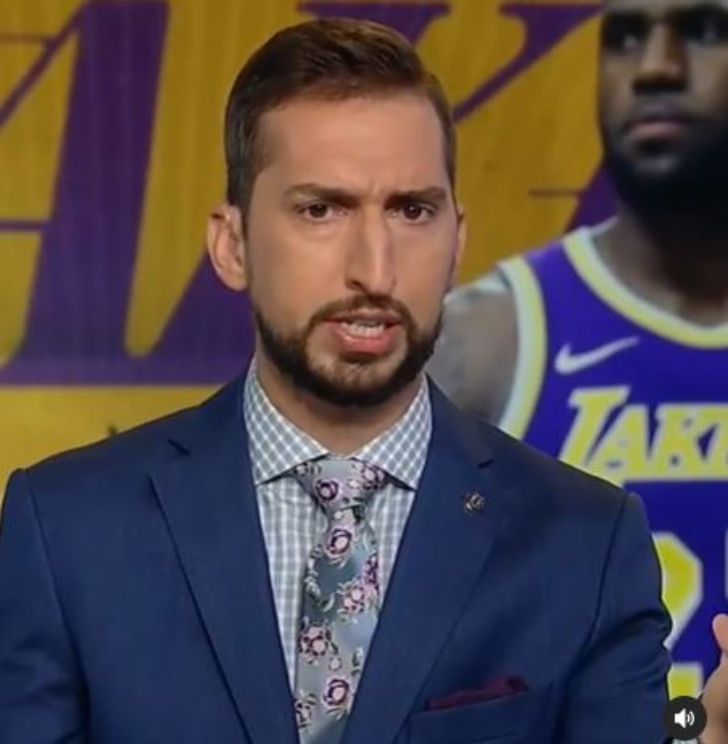 After college graduation, Nick Wright pursued a career in sports broadcasting and the journey of more than a decade earned him wide fame & fortune. Initially a radio host, Wright joined Fox Sports in 2016 and has since worked for Fox's shows such as First Things First and FS1’s The Herd With Colin Cowherd.

So far, the television personality is living a successful professional and personal life. He is married to his sweetheart Danielle and is a father to their three children.

Nick Wright's Life & Education- What Is His Age?

Wright was born on October 3, 1984, in Kansas City, Missouri, the United States. His parents are Louie Wright and Charlene Wright. An American by nationality, Nick comes from a mixed ethnic background- has  Italian and Irish ancestry. He has a sister named Joanna.

As of June 2021, Nick Wright is 36 years old. His birth sign is Libra which defines his personality as idealistic and innovative.

Wright is an alumnus of Syracuse University and graduated with a degree majoring in broadcast journalism in 2007.

Nick Wright began his professional career as a radio jockey from the non-commercial radio service of Syracuse University, WAER 88.3 FM. He hosted several programs at the FM station including a double-overtime post-game show.

Then after Wright got an opportunity to host the KCSP 610 AM show at Kansas City. From a weekend host, the skilled speaker went on to become a production assistant. He later hosted his own show named What’s Right with Wright.

Continuing his hosting journey, he then worked on Houston’s KILT 610 AM. He hosted the morning drive of the show In the Loop with Nick and Lopez along with his co-host John Lopez. He is known for discussing social problems along with the sports context. He worked for four years in Kansas City’s KCSP 610 AM.

Besides working for several shows, the television personality is a host in the morning show First Things First on Fox Sports. Since the 5th of September 2017, Wright, Jenna Wolfe, and the former football player Cris Carter are regularly hosting the show.

How Much Is Net Worth of Nick Wright?

As of 2021, Nick Wright has an estimated net worth of $1 million. Most of his earnings. came through his career as a radio host as well as his work with Fox, hosted its show First Things First and The Herd with Colin Cowherd Show.

Since 2007, following graduation from Syracuse University, Wright is active in radio broadcasting and then sports broadcasting. Being one acclaimed sports analyst, he is paid attractive money for his job. As per a reliable source, Fox News channel host's average annual salary is approx $64,838, so for the likes of Wright with years of experience, the payroll figure would have gone higher.

Nick Wright Is Married- Who Is His Wife? Any Kids?

The television personality Nick Wright is married to his fashion stylist wife Danielle Wright. The two walked down the aisle on 14 April 2013. Since the beginning of their relationship, his life changed toward good in every aspect.

When their relationship began, he was going through some difficult situations in his life, that time Danielle came as a light in his life and helped him to come out of the depression.

On their first date in 2007, the couple was accompanied by Danielle's two children, son Damonza and daughter Diorra. Wright is very close to his stepchildren and later he adopted them. The additional member of their family is their daughter Deanna who was born in 2013.

The duo is yet to confirmed when they married; reportedly, they get matching tattoos on their special fingers instead of diamond rings.

Wright is living a joyous life with his wife Danielle and their three children. So far, the couple is happily together and are madly in love with one another. The family of four lives in New York.