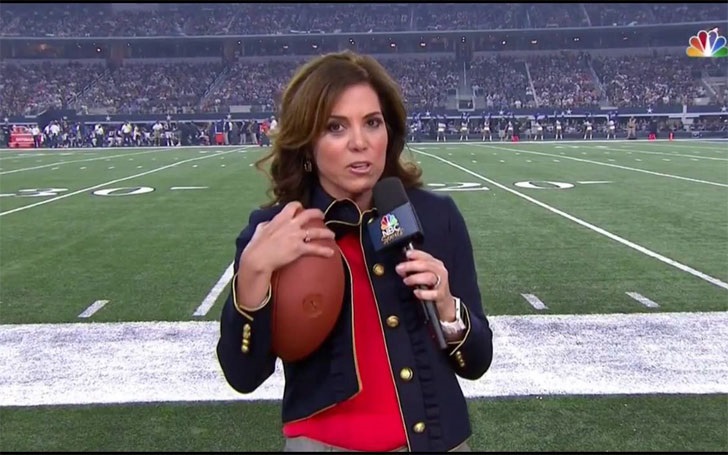 NBC Sports' Michele Tafoya is a married woman. She married Mark Vandersall, a financial advisor at Vandersall & Associates in 2000 among their close family friends.

It has been 17 years since their marriage, how is it going on at present? Is Tafoya happy in marriage, does she have any children with Mark Vandersall?

The couple got married in 2000 and are doing great in their marriage. But, do they have any children?

Yes! The couple shares two beautiful children together. They have a son, Tyler and an adopted daughter. Michele Tafoya is so in love with the children, she can’t stop posting their pictures on social media.

Michele Tafoya, her husband Mark Vandersall, and their son and daughter

The children are just as lucky as Michele, as she is quite possibly the coolest mom a kid can have. And, why do we say that?

Well, she posted a picture of her daughter’s shoes saying that when she isn’t working she helps her daughter to make a fashion statement. That sounds absolutely cool, doesn't it now?

When I am not on the covering the NFL, I am helping my daughter make fashion statements! #CourtyardSuperBowlContest

And her caption does justify the picture

Michele Tafoya helped her daughter to create a fashion statement

In 2008, Michele Tafoya left her job to make her family happy and to be with her children and husband. She had suffered from four unsuccessful pregnancies before giving birth to her son.

She joined NBC Sports in 2011 and has been working as a sideline reporter ever since.

Before giving birth to a son in 2005, she had four miscarriages. Though she was doing great in her career, she wasn’t satisfied with her personal life at all.

The trauma of the miscarriage led her to believe that she could make an impact if she actually adopted a child who deserved a great life. Tafoya and her husband adopted a girl after giving birth to their own son.

Michele Tafoya quit her job at NBA games on ESPN and ABC in on October 21, 2008. After quitting the job, she posted a picture with a caption, “Left it to hang out more with my family.''

Michele is a self-described  ''pro-choice conservative with libertarian leanings.'' She has often mentioned that he is moderate when it comes to her beliefs and is not an unreasonable or extreme conservative.

Michele Tafoya's tweet about quitting her job at NAB

Later, in on of her interview, Tafoya said:

Actually, I used to have a full-time radio show, and I finally had to give it up because it just became too much for the entire family. Mom was gone too much.In my case, I’m very lucky – my husband works and I both work so we have a two income household. We were very fortunate that I was able to slow it down.

The one thing I always tell myself when I come home from work is that I have to be a mom. It’s not the kid’s fault if I’m stressed and I’m exhausted- that’s not their problem. So I just tell myself – ‘I can do it, I’m a grown up. I just turn on the mom mode and have fun. I think it’s amazing that you made that sacrifice – giving up something you loved because it wasn’t right for your family.

Well, what a great mom she is and her children are truly blessed that they could find a mother like Michele Tafoya.