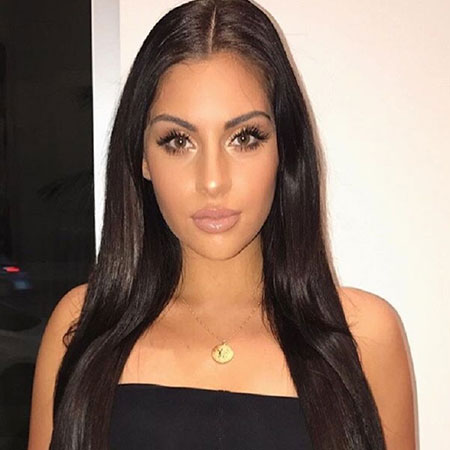 Nazanin Kavari is an American beauty and fashion blogger and a YouTube star. She has about 1.1 million subscribers on her YouTube channel where she mostly uploads videos regarding beauty and fashion. She is in a relationship with a famous YouTuber and video editor Mel the DJ.

Nazanin Kavari was born on December 7, 1998, in Romania under the zodiac sign of Sagittarius that defines her personality to be extrovert, optimistic and enthusiastic. She holds an American nationality and belongs to Persian ethnicity.

She moved to the USA with her family and older brother Amir Kavari and elder sister Yasmin Kavari when she was 3. On June 6, 2017, she graduated from Olentangy High School which is located in Ohio and played lacrosse for her school team.

Nazanin Kavari started her career as YouTuber. She created a self-titled YouTube channel on September 9, 2012. On March 11, 2013, she uploaded her first YouTube video My Hair Care Routine +Tips (Thick, Curly hair). The video received thousands of views which boosted her confidence to upload other videos about beauty on her channel.

As of January 2019, she has about 1.1 million subscribers and has got 59 million views on her channel. On April 26, 2016, she posted another video titled Get Ready W/ Me? Prom 2016, which gained more than one million views. It was her highest watched video at that time.

Some of the most watched videos on her channel are What Guys REALLY Think ft. Kris London!, My Haircare Routine? Tips + Secrets, and Get Ready With Me?PROM| Nazaninxox which received the viewers in millions.

She has also attended BeautyCon several times and is considered as one of the most influential beauty vloggers of Persian descent.

On June 5, 2013, she opened a second YouTube channel with her sister. On her second channel, she mostly posts videos featuring her family members. Besides, she started working on YouTube series Sheltered from 2017.

Nazanin Kavari has been tight-lipped about her net worth, but as a YouTuber, she has earned some decent sum of money. According to the social blade, an average YouTuber earns around $308 - $4.9k per month and approximately $59.2k per annum. As of early 2019, Nazanin Kavari's net worth can be speculated to be in thousands of dollars.

She has been active as a beauty and fashion vlogger since September 2012 which happens to be the major source of her income. According to some sources, a YouTuber earns about $10,000  per 100,000 views.

Besides, Nazanin Kavari owns a wonderful Mercedes-Benz GLK350. On the other side, she also has a pet cat named Nala.

Nazanin Kavari, the beautiful Persian YouTuber is currently in a romantic relationship with Mel the DJ, a social media star and a video editor. Her boyfriend is an aspiring rapper and DJ who was featured alongside Aircraft on the freestyle song Chill & Stack.

They first met at an American multinational corporation where Kavari and American DJ used to work together. Nazanin introduced her boyfriend to her mother when he went to talk to her.

They became close friends and after a few months, they started dating in Feburuary 2017. They even went to rapper Jay-Z's concert in Cleveland on Mel's birthday. Mel even received a surprise birthday present from Jay-Z, a black 444 jacket and a part of 444 tours with Shawn Corey Carter. In July 2018, this cute couple went to trip to Hawaii for their vacation.

Looking at their love life, they are deeply in love and according to the sources, Mel is planning to get married with the YouTube star in Hawaii.

She is an active social media such as Instagram where she has about 721k followers as of 2019.

In the video shown video, Nazanin Kavari gives tip on how to do makeup by just using $1 Juno Sponge.

You May Also Like: Rhett James McLaughlin, TmarTn, Eugenia Cooney, and Tal Fishman