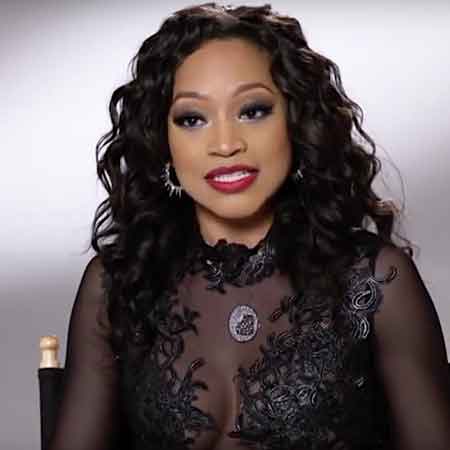 Monyetta Shaw is an American actress, radio jockey, author and an entrepreneur who is well recognized as the ex-girlfriend of American rapper Ne-Yo. Monyetta garnered success in every field that she entered and is currently living the life of a philanthropist.

Monyetta Shaw was born on the 31st of May, 1980 in Shreveport, California. Details about her parents and siblings are not disclosed yet. She was born under the birth sign Gemini which describes her as sociable, communicative, thoughtful and witty person. She is of African-American descent and her nationality is American.

Shaw grew up in Shreveport, from where she completed her schooling. After the completion of her school education, she attended Louisiana Tech University in Ruston, from where she graduated with a degree in science. While she was attending the university, she was a respectable member of the Alpha Kappa Alpha Sorority.

Monyetta Shaw started her career as a radio jockey after completing her college at the Shreveport's 99.7 KMJJ FM. There she worked as a host at the Daddy Roe Show. Later, she left the job to pursue a career in acting.

She made her acting debut in 2008, with the film Soul Men, starring Samuel L. Jackson and Mike Epps, where she portrayed the role of Odetta. The same year, Shaw was offered two other roles that she's been uncredited for; as a banquet dancer, in the movie Welcome Home Roscoe Jenkins, starring Martin Lawerence and Louis C.K. and as a Red Carpet elite in the movie Private Valentine: Blonde and Dangerous, featuring Jessica Simpson. She got her breakthrough role in the 2011 film Video Girl, where she played the lead role, acting opposite to Meagan Good.

Monyetta Shaw made it to the television screens as the ex-wife of Ne-Yo in Vh1's 2014 show, Atlanta Exes which also featured Torrei Hart. The show features the life of girlfriends and ex-wives of famous personalities. She also portrayed the role of Elise in the TV sitcom Uncle Joey in the year 2017.

She is the founder of the Evan Grace Group, a non-profit organization which she named after the second names of her children. Besides, she is also an author and has published a book titled Bigger Than Me in March 2016.  She is also the owner of the clothing line Emerlyn and Ester Boutique.

As of 2018, Monyetta Shaw has an estimated net worth of $2.5 million which she has earned from her career in the movies as well as in TV. The salary she got from her previous job as a radio host have not been mentioned.

She has also worked in some television series, movies and the reality series from which she has accumulated a good amount of money which add up to her net worth. Since she is a social worker and a philanthropist, she is actively involved in charity works which makes it difficult to interpret her actual net worth at the present time.

She has been helping 48 children of Swaziland, Southern Africa to get good resident and foods; she raises funds from her Evan Grace Group in order to help the children.

Monyetta Shaw was previously in a relationship, but she is currently single and parenting her two kids Mason Evan Smith and Madilyn Grace Smith. She was previously engaged to rapper Ne-Yo whom she met in 2009, but the couple never married. The couple later separated in June 2013, due to their irreconcilable personal differences. Despite their breakup, they are still in a good friendship which is possibly for sake of their two children.

CAPTION: Monyetta Shaw with her kids and ex-partner Ne Yo SOURCE: thejasminebrand

After the breakup, Ne Yo started dating Crystal Renay Williams whom he married in a private ceremony in 2016, while Monyetta Shaw has been living a single life and has dedicated herself in charity works and philanthropy.