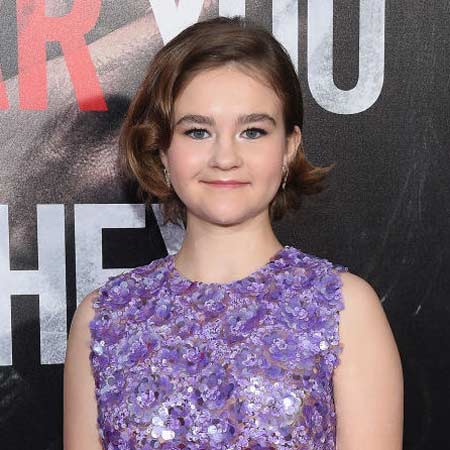 In spite of being differently abled, Millicent Simmonds stands as an idol to many who aspires to become an actress. The 15-year-old deaf actress first grabbed the attention following her breakout performance in the acclaimed movie Wonderstruck as Rose.For her role, she earned a nomination for numerous awards including Critics' Choice Movie Award under the category Best Young Performer at the 23rd Critics' Choice Awards in 2017. The actress gained international fame for her portrayal of Regan Abbott in a 2018 box office hit movie A Quiet Place.

Millicent Simmonds was born on March 1, 2003,  in the Utah, United States. Regarding her nationality and ethnicity, she is a White American. She was raised in Utah along with her four siblings; two older and two younger than her. Due to the overdose of medicine, she lost her hearing capacity when she was only twelve-month old.

Following the unfortunate incident, Simmonds' mother learned American Sign Language as well as tutored the family for the easy communication with her. At the tender age of three, she went on to attend the Jean Massieu School of the Deaf and became the part of its drama club too.

After Simmonds completed her sixth grade, she joined the Mueller Park Junior High School in the fall of 2015. Meanwhile, she also performed at the Utah Shakespeare Festival in Cedar City, Utah.

Millicent Simmonds rose to stardom following her iconic role in a successful movie Wonderstruck. For the role Rose, a 12-year-old deaf girl, she competed with more than 250 others. She shared the screen alongside Oakes Fegley, Julianne Moore, and Michelle Williams.

For her unusual performance in the movie, she was also nominated for a number of prestigious accolades like Critics' Choice Movie Award and Women Film Critics Circle Award. Her career reached a new height in 2018 when she played the role Regan Abbott in the well-received thriller movie A Quiet Place. She appeared in the movie alongside Emily Blunt, John Krasinski, and Noah Jupe.

At such a young age, Millicent Simmonds has earned a considerable amount of money from her acting career. Her movie Wonderstruck collected $1,060,377 at the domestic market and $1,419,478 at the foreign market. Similarly, her other successful movie A Quiet Place (2018) became an instant hit at the box office and grossed $235 million worldwide against its producing cost of $17-21 million.  The movie likewise received acclaim from critics. Not only name and fame but she also received a six-digit paycheque from both the movies.

The accidental actress Millicent Simmonds is not dating anyone officially at present. As of now, she is more focused on her career.

Her favorite food is Chinese and she loves kickboxing. She is also an avid book reader. Her favorite book series is Cherubs, and the color is Orange.  One of her favorite movies is Paper Moon.