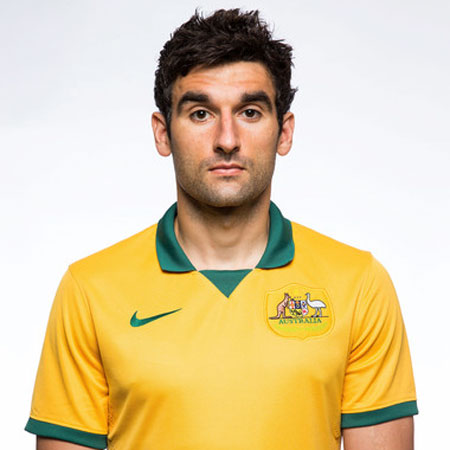 Mile Jedinak, the Australian international football player, who plays for English Premier League club Crystal Palace. Jedinak has made more than 40 appearances for his national team. He is appreciated for his aerial ability, strong defensive tackles and most of all his amazing leadership. Jedinak is also holding the role of captain for both his Current Team and Nation.

Mile Jedinak was born on 3rd of August, 1984. He was born in Sydney, Australia. This Australian international defensive midfielder currently

Mile Jedinak took hold of footballing as his pa s sion and future career from an early age. He played in competitive sports from his school days. He was part of the PDSSSC which was the competition that contended Catholic school.

He was part of St Agnes Catholic High squad. After his earlier childhood football run, he was unveiled by Sydney United. He had 6 years long journey at the Sydney based club. During this spell at Sydney, he played on European soil too.

He was loaned out to Varteks in 2003. He couldn’t get much from the Croatian side, Varteks. He made just a single appearance in a 2003-04 UEFA Cup qualifier against Levadia Maardu. Upon his return, he was again on loan deal with South Coast United in 2005 where he made 18 appearances and scored 7 goals proving himself dangerous on goals too.

He had a pretty impressive run with the Sydney United. He made 82 appearances and scored 12 goals. He was part of NSW Premier League 2006 winning side. Jedinak penned contact with Central Coast Mariners upon the contract expiry with Sydney United. He made debut with the club being unveiled in the 2006 Pre-Season Cup play-off against Newcastle Jets.

His stay at Central Coast Marines was quite fruitful as he achieved success with the club helping them earn Premiers’ Plate in the 2007-08 season of the Hyundai A-League. The defensive midfielder was also the club’s second highest goalscorer for the season. With Mariners, he made 45 appearances and scored 8 goals.

Turkish side Gençlerbirli?i signed Jedinak on 25 December 2008 for two and a half year. The contract was effective of January 2009. With the Turkish club, he made a competitive debut on 24 January 2009. He gave the club 3-1 victory over Kayserispor.

His first goal for the club was in the match against Fenerbahce and the goal was the winner one in 1-0 close game. He was loaned out to another Turkish club Antalyaspor on 23 August 2009.

As a year of the contract remained for Jedinak at Gençlerbirli?i, it was set that the Australian international would leave the club. Jedinak scored 4 times in his 38 appearances for Gençlerbirli?i. Similarly, he scored 5 goals in 28 appearances during a loan spell at Altalyaspor.

Jedinak signed for English club Crystal Palace in July 2011 as a free agent. With his competent defensive play and great leadership display on the pitch, he became fans’ favorite and his name was started to be sung at Selhurst Park during the 2012-13 season.

It was final match day of the season and he was handed over the captain’s armband upon club captain Paddy McCarthy’s injury. His 89th-minute goal provided Place 3-2 late winner and also helped then earn a place in the playoffs. He then captained the playoffs and led the team to gain promotion after winning the game.

The club was then promoted to the top-tier league of the nation, Barclays Premier League. He was also the player of the season for the club for the 2-12-13 season.  Jedinak then penned 3 and a half year-long contract with the club tying him up in the Palace outfit till summer 2017.

His first Premier League goal came off a penalty against West Ham United in April 2014 but he didn’t celebrate his ball into the net. The match was for the honor of his fellow compatriot Dylan Tombides following his death.

Jedinak unveiled himself with an international outfit in 2008 where he made debut in a friendly against Singapore. He was also the part of the 2003 FIFA World Youth Championships in the United Arab Emirates. He played against the host nation, Canada and the Czech Republic. Jedinak was also a very important member of the Australian squad in FIFA World Cup 2010 in South Africa.

Jedinak’s first international goal came off a header against the Korea Republic at 2011 AFC Asian Cup. Jedinak handled Australian side as captain for the first time in the friendly match against Ecuador which they, unfortunately, lost 3-4. He has made 9 appearances for the Australian U-20 side. Similarly, he has made 43 appearances for senior side scoring 4 goals.

Mile Jedinak's Honors and Achievements And Net Worth

Jedinak was an integral squad member of Sydney United when they won NSW Premier League in 2006. Wish Central Coast Mariners, he won A-League Premiership of 2007-08. His amazing footballing earned Crystal Palace winner in the Football League Championship play-offs in 2013 helping them earn a spot in 2013-14 Barclays Premier League.