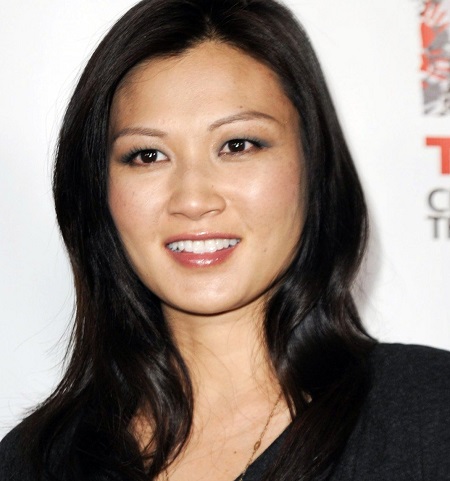 Michelle Krusiec is a famous Taiwanese-American actress, producer, and writer who started acting career in 1986. The 45 years old actor is known for appearing in the television series and movies like Hollywood, Getting On, CSI: Miami, Grey’s Anatomy, ER, The Invitation, Take Me Home, among others.

What Is Her Real Name?

Michelle was born Ya-Huei Yang. She was born on 2nd October 1974 and is currently 45 years old. The actress was born in Taiwan. Her father’s elder sister adopted her at the age of five and changed her name to Michelle Jacqueline.

Michelle studied at Virginia Polytechnic Institute and State University and graduated with a B.A. degree in 1996. She attended the University of Oxford on scholarship.

The 45 years old acto started her professional acting career in 1986, but made a big-screen debut in 1992, appearing in the television series, CBS Schoolbreak Special.  In 1995, she acted in the movie Nixon.

As of 2020, the actress portrayed the character of Anna May Wong in the series, Hollywood alongside David Corenswet and Jeremy Pope.

Michelle has also worked in around a dozen of movies like Pumpkin, Sweet Home Alabama, Duplex, Daddy Day Care, Dumb and Dumberer: When Harry Met Lloyd, Duplex, Far North, Saving Face, Cursed, Nanking, What Happens in Vegas, Take me Home, Knife Fight, The Invitation, The River Murders, among others.

Michelle wrote and directed a show Made in Taiwan.

Michelle Krusiec’s Net Worth In 2020

Michelle, who has worked on the entertainment field as a writer, actor, and director, has been able to collect a net worth of $2 million. The actress’s main source of income is an acting career.

Michelle has not made headlines regarding her relationships and affairs. However, while surfing on her Instagram, we came to know that she is a married woman.

Dear husband, sorry that the filters I pick make me and the kids look good and make you look like a lobster. #mixedracefamily #happyaugust1st #magichour #hapafamily

On 1st August 2018, Michelle posted a picture of her husband along with her two kids. She, however, did not disclose the exact details of her marriage, spouse, and children. She has a son and a daughter.

The actress is 5 feet 3 inches tall and has a slim body build.