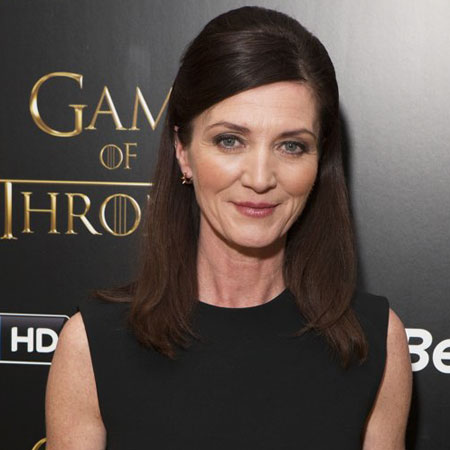 Michelle Fairley is a Northern Irish actress best known for appearing in the HBO series Game of Thrones as Catelyn Stark. Michelle is also known for portraying in USA Network series, Suits as Dr.Ava Hessington and 24: Live Another Day as a terrorist.

Michelle Fairley was born on July 11, 1965, in Coleraine, Northern Ireland to Theresa(worked as a nurse) and Brian(owned a chain of pubs in County Antrim). She belongs to white ethnicity and holds an Irish nationality. She is the second child of her parents and has an elder sister named Simone.

Michelle joined the Roman Catholic Grammar School. She develops her interest in acting since her childhood days but such activities were not part of the curriculum. But later on, she became a member of the Ulster Youth Theatre and after several years of membership, she went to Manchester where she joined then Manchester Polytechnic and now Manchester Metropolitan University.

After her graduation, Michelle traveled to Belfast where she joined the repertory company Fringe Benefits with Conleth Hill to sharpen her skills. In the early days of her career, she appeared in numerous British television shows in short roles. Her early portrayals include The Bill, Holby City, Casualty, etc.

Michelle Fairley then replaced Heather Bleasdale who played the role of Mrs. Granger in the movie, Harry Potter, and the Deathly Hallows, which made her popular among the audiences. Her role as Caitlyn Stark in the HBO series Game of Thrones is the most notable work in the whole career where she appeared alongside several other popular stars like Kit Harington, Peter Dinklage, Maisie Williams, Enzo Cilenti, etc.

Besides, Michelle has appeared in several television series, movies, and theatrical shows. Some of her best works include Othello, Rebellion, Suits, Crossing Lines, Fortitude, The White Princess, etc.

Who Is Michelle Fairley Dating Currently?

The 56 years old, Michelle Fairley is currently single. However, she was in a relationship with a man with whom she lived together for seven years and separated in 2012.

After separating from him, Michelle said:

There are times when you have to face the truth, you have to face reality in your life and you either go in with someone or you go,  No, I want a change, I need a change. It's my life. It was a voice in your head that you can't not listen to.Though you ignore it for a long time.

Michelle doesn't have any children and possibly won't have anyone according to her. She revealed:

I missed the gene. I was never born with that in my psyche, in my body. My sister Simone, from very young, you could tell instantly she did. I have many nieces and nephews and I am godmother to many children but it's never been in me. Sounds awful, doesn't it?

I expect people to always go, Oh my God, cold b----. Why? Why have children just because I've got a womb?

There is also a rumor that Michelle has a daughter named Hermoine Jean but the child's biological father is unknown. She might have adopted the daughter.

Michelle Fairley has maintained a net worth of $3 million. Most part of her net worth is believed to have come from her earnings of the series, Game of Thrones.

Michelle stands at the height of 1.6m/ five feet five inches with the body measurements of 34-24-34 inches.