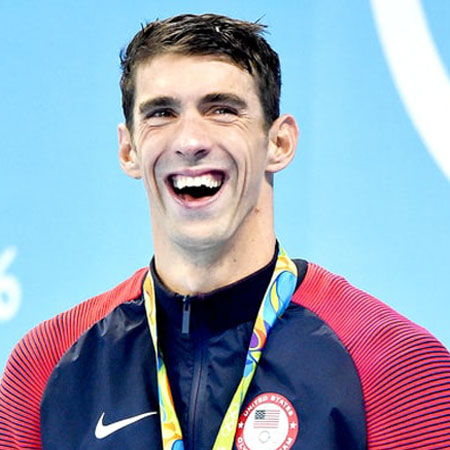 Regarding his personal life, Phelps is married and has two children.

His parents were Deborah Phelps and  Michael Fred Phelps. His mother was a middle school principal and father is a retired Maryland State Trooper who played football in high school and college. When he was just nine years old, his parents divorced and his father remarried in 2000. His parents raised him with his sisters, Whitney Phelps, and Hilary Phelps in the Rodgers Forge neighborhood of nearby Towson.

Regarding his academics, he attended Rodgers Forge Elementary, Dumbarton Middle School, and Towson High school. From the age of seven, he began swimming and by the age of 10, he held a national record for his age group.

The promising swimmer, Michael Phelps was perfect in the spots and drew limelight at national and international levels. From an early age, he started swimming and later on pursued his career in the same field. He was competing with himself rather than with his competitors to bring out the best in him. He broke his own record in the 200-meter butterfly at the World Championship in Fukuoka to secure his first medal.

Phelps participated in the Pan Pacific Championships and broke several world records at the main event. Following other numerous victories, he entered in the 2003 World Aquatics Championships in great spirits and won four gold medals and two silver medals.

10 years ago today i had the chance to share the pool with these guys once again. I couldn’t have asked for better teammates to share this amazing moment with!! #aaronpeirsol @brendanhansen12 and @jason_lezak . I know as being a part of team USA how important the TEAM is! Thank you boys and I can’t tell you how much of an honor it was!!! These guys and others helped me make history and do something that so many ppl thought was impossible!

In 2003, at the meeting of Australians and Americans players, Phelps proved his mettle by breaking the world record in 400-meter and 200-meter individual medley. Following year, he competed in the US Olympic Team Trials and out of six events he participated, he was selected for all those events. At 2004 Olympics he became the second-best performer where he won six gold and two bronze medals.

Furthermore, Phelps has participated in 5 Olympics and won 28 medals including 23 gold, 3 silver, and 2 bronze medals. After the 2012 Olympics, he got retired from the swimming stating,

''I'm done. I'm finished. I'm retired. I'm done. No more. I just wanted to be done with swimming and didn't want anything to do with the sport anymore.''

In 2014, he made his comeback and participated in several tournaments. Still, in 2018, he holds the 12 age group records with nine in long course and three in short course. Besides, he holds 26 Guinness World Records.

Michael Phelps' Net Worth, Salary, And Major Source Of Income

Michael Phelps is living a luxurious life with an impressive income and salary.  He has won altogether 28 medals and his net worth is estimated at $60 million as per both The Richest and Celebrity Net Worth. His record-setting amount of medals played vital roles to boost up his net worth. As per the Olympic Committee, the gold medalist receives $37,500, $22,500 for silver and $15,000 for bronze.

Phelps has also collected a large amount of money from his endorsement deal. It has been reported that the former competitive swimmer makes over $12 million a year from sponsorships and endorsements.

10 years ago after winning 8 golds in Beijing I received a million dollar bonus. There was one thing and one thing only that I wanted to do with that bonus. I started the @mpfoundation ! At the Michael Phelps foundation we are working to teach the importance water safety and how to live healthy and active lifestyles. And since becoming aware of the importance of my own mental health we have worked hard to add a mental health awareness component. I’m incredibly proud of how far my foundation has come, but there’s still more work to be done!!!

The Olympics champion, Michael Phelps and former Miss California USA Nicole Johnson secretly married on June 13th, 2016 at Paradise Valley, Arizona, and they share a baby boy named Boomer who was born a month before their wedding on May 6th, 2016. On 12th February, they welcomed their another child, a son Beckett Richard Phelps on February 12, 2018.

In 2014, the Olympian was going through the worst time of his life as he was sent to rehab for DUI and he also had faced career setbacks and others in November of 2014. It was a hard time in his life.

However, he got out of rehab and later his girlfriend was pregnant with his first child, in 2015 and in February 2015, Phelps and Johnson got engaged. The couple planned to get married sooner than later in the presence of a big audience of guests. However, they got married secretly in Paradise Valley, Arizona. The couple has been together for more than 9 years.

Yesterday was such an amazing day! Thanks for all of my b-day wishes!! #gettinold #pooltime #familyof4

The swimmer's self-proclaimed former flame, Taylor Lianne Chandler came forward with some graphic detail of their sex life. Followed by an incident in March, where Kim Petrogave narrated a story to the National Enquirer, claiming that Phelps gave $900 for Chandler to come to his Hotel in February 2013.

Check out the skill video of Michael Phelps