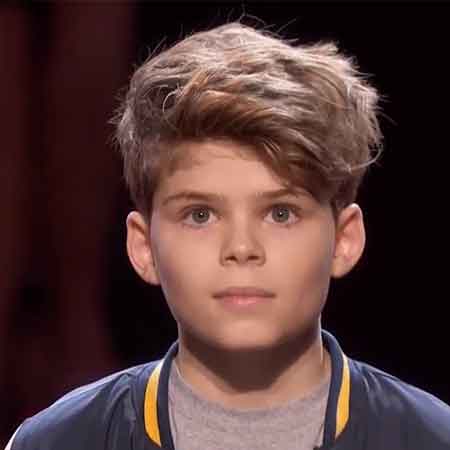 Pa s sionate about dancing since the tender age of nine, Merrick Hanna is now an expert in freestyle dancing especially his flo-bot style of dance helped him to take his career to the next level. He was the semifinalist of the American's Got Talent's season 12.  He has also embarked on acting and has performed in summer Shakespeare runs of Much Ado About Nothing. Along with his flourishing dancing and acting career, he has successfully modeled for several national brands like Honda and Kids. There is no doubt that he is a man of all seasons.

Merrick Hanna was born on March 22, 2005, in San Diego, California, the United States. He is the son of father Shawn Hanna and mother Aletha Hanna. He has a younger brother named Sagan Hanna. His father graduated from the  University of California, San Diego and sometimes he practices with UCSD students at Poptikz, the popping club.

As of 2018, Merrick attends Khan Academy and likes working with numbers and solving numerical problems. He has a plan to become a robotics engineer along with a meteoric dancing career.

Merrick Hanna was pa s sionate about dancing from an early age and now has grabbed huge attention for his unbelievable flo-bot style of dance. As per him, he got inspired by his grandmother who used to take four cla s ses in a week even in her 80s.

He first fell in love with dancing when he watched the Jabbawockeez on ABDC. After watching dancing shows on television and online videos, he gradually honed his dancing skills.

Hanna has participated in several reality competition shows like Lip Sync Battle Shorties, So You Think You Can Dance: The Next Generation, and especially his participation in one of the biggest reality shows America's Got Talent helped him to garner such fame.

After receiving much appreciation from the judges and the audiences, his journey to American Got Talent ended eliminating in the second week of the semifinals.

His last mind-blowing performance in the show compelled judge Mel B to gave a standing ovation to him. Aside from his dancing career, he is also an actor and has performed in summer Shakespeare runs of Much Ado About Nothing as well as A Winter's Tale. Furthermore, he was featured in an episode of The Ellen DeGeneres Show.

He is also a successful YouTube personality. He has been actively running his self-titled YouTube channel since August 2015 and most of his dancing videos have gone viral several times on YouTube, Facebook, and Instagram. As of October 2018, he has over 254K subscribers on his channel.

Likewise, Hanna performed in an annual entertainment showcase YouTube Onstage, in Anaheim, California. He is a model so far and has worked for national brands which include Kids, H&M, and Honda.

Merrick Hanna is one of the popular teenage dancers and not to forget a promising actor and model. Along with his name and fame, he is also earning an impressive income. According to some authorized sources, Merrick Hanna's net worth is speculated to be over $1 million.

From his YouTube channel, Hanna earns an average of $2.8k-$44.1K per year. Moreover, he modeled for several reputed brands like Kids and Honda which is also one of his sources of income.

Merrick Hanna is too young to be involved in any kind of relationship. He is single at the moment and there are also no reports of his past affair or girlfriend. He is pretty focused on both his professional and academic career.

Merrick prefers to spend time with his friends at the beach, surfing, and playing Clash of Clans. With his unique dance style, he also loves to entertain the children at the Ecke Family YMCA.

So far, he helps young kids at the Ecke Family YMCA charity events giving them hip-hop dance lessons. He is also a dog person who has a black-colored pet dog.

I love dogs and they love me . Unplanned photoshoot with @stephbarkley's dog @nekothepup check them all out . I hope everybody is have an awesome Memorial Day! . #pup #photooftheday #memorialday #dogphotography #doglover #agt #newfriends #instaphoto #younghollywood #wcgw #funny #vidcon

Merrica is also a social media star has over 714.5k followers on his Instagram account as of March 2019.