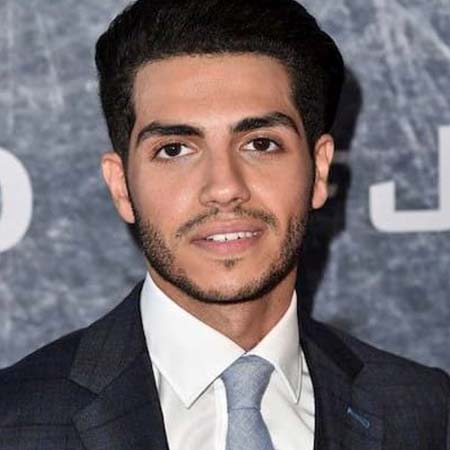 The Egyptian-Canadian actor, Mena Ma s soud is famous for appearing in the Disney’s live-action remake of Aladdin as the main character alongside Will Smith and Naomi Scott. He is also known for his role Tarek Ka s sar in the series Tom Clancy and Jared Malik in the 2015 series Open Heart.

Mena Ma s soud was born under the birth sign, Virgo on September 17, 1991, in Cairo, Egypt to Egyptian Coptic Christian parents. He holds Egyptian-Canadian nationality and belongs to mixed ethnicity.

YO! Happy Father’s Day pops! Love ya lots. P.s. Those gla s ses are making a comeback - you’re a visionary.

Regarding his education, he went to Ryerson University and achieved his degree in Theatre and Acting.

As per religion, he follows Christianity.

The young and talented actor, Mena Ma s soud made his professional debut from the short movie What Happened Next, and later on, he also started to work in TV shows after he first appeared in Nikita. Prior to this, he worked in several TV series such as Poser, The 99, om Clancy’s Jack Ryan.

His big screen debut happened in 2015 after he worked in the movie Let’s Rap. His career got the limelight after he portrayed the lead character in Aladdin alongside Naomi Scott and Will Smith. The famous singer Zayn Malik remade the song, A Whole New World for the movie.

Apart from acting, he is also the founding member of  Evolving Vegan which helps people to change their eating habits by promoting vegan related stuff.

The popular actor, Mena Ma s soud is a s sumed to hold the net worth of around $2 million. He has added it from his TV apperance as he is supposed to receive over $100,000 per episode.

His recently released movie, Aladdin is also earning a good amount worldwide. In the first week of its release, it was able to collect around $80 million.

Apart from his acting career, his other source of income is Evolving Vegan. The price of some of his products is listed below.

Mena Ma s soud is yet to be married but he seems to be in a relationship with a mysterious girlfriend. To date, he has not revealed about his dating life, but looking at his Instagram post, he surely seems to be romantically involved.

One of his posts on March 6, 2019, featured a lady holding his hand has compelled us to think about his affairs.

They should have really used me to promote that festival everyone’s talking about. On a serious note though: @grandvelascabos is all the feels.

But he has not confirmed about his relationship anywhere, hence, we cannot claim anything right now.