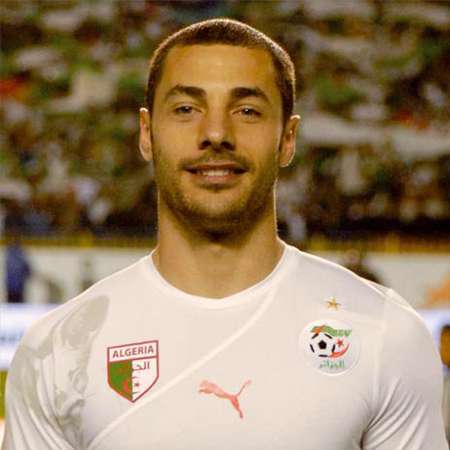 Medhi Gregory Giuseppe Lacen is the full name for Medhi Lacen, an Algerian footballer, born in 1984 May 15 at Versailles,France. He is 30 years old and a married man. There is no news on how many children he has but it is concluded that he has been the father as he could not play in 2010 Africa Cup of Nations due to his wife’s pregnancy. He plays in the Current Team of La Liga Club Getafe CF as a defensive midfielder from squad No.5 and in the Algeria National Football team as a defensive midfielder.  Medhi Lacen cherishes the height 176 cm and weight of 74 kg. His father is an Algerian and mother is Italian. His younger siblings Michael Lacen is also a footballer who plays for FC Versailles of France. He was born in France but his father is of Algerian origins so from this condition he got nationality of Algeria and represented through Algerian National Football Team. There is his undisclosed salary statistics. But it is found that his current market value is 1.3 million GBP. There is also no information available on his agent.

Mehdi Lacen has started his youth career from the club called Versailles of France as he used to reside in France. He moved to Laval afterwards developing and enhancing through trainings at these clubs. He was promoted to the senior team of Laval and made his professional debut in the year 2003. He spent a season at Laval appearing in 4 matches from the team. He moved to ASOA Valence for the season of 2004/2005 appearing in 35 matches. Afterwards, he moved to Spain in the year 2005, joining with Deportivo Alaves. He spent three years in this club appearing in 86 matches. Later in 2008, he made his move to Racing Santander. Mehdi Lacen competed with Peter Luccin who was also a newly signed for the first choice status in this club. He was signed in three year contract and he appeared in 100 matches bagging 4 goal scores in this period with the club. After the end of his contract with Racing, he joined with his present club Getafe in four year contract. He has appeared in 74 matches from this club with a goal so far.

Mehdi Lacen is the name of a versatile midfielder whose main position is defensive midfielder and also plays a central midfielder. His international reputation is average. He is very strong at tackling. He likes to tackle and dive into tackles. He likes to play the ball off the ground. He likes to shoot from distance. He is good at long shots. He has good marking capability on shots. Mehdi Lacen is an enthusiastic player and keen to learn. He needs to improve his pa s sing skills for his better career. One can view the pictures, videos and news on this player in different websites via google.