Maya’s exact birth details are missing. Some sources claim that Maya was born on 12th March 1982 and is 38 years old, whereas some gossipmongers claim her to be born in 1988 and is 32 years old.

The television personality was born in Israel and holds dual nationalities; Israeli and American. Her ethnicity is mixed. She follows Christianity. As of now, she resides in Los Angeles and Miami, Florida.

Maya did not reveal her parents' name; however, her mother is a housewife, and her father is a businessman. She fluently speaks English, Hebrew, and Dutch.

Besides this, she is a television personality and entrepreneur who has appeared in the Netflix web series Selling Sunset. In the series, she has appeared alongside Christine Quinn, Davina Potratz, Romain Bonnet, and Mary Fitzgerald.

As of 2021, Maya Vander’s net worth is reported to be around $3 million. Her annual earning is about $300 thousand. She enjoys a lavish lifestyle with her husband and kids.

Maya is a married woman. The name of her husband is Dave. Besides this, the television personality did not reveal much about her spouse. Similarly, it is not known when the pair got married or started dating. 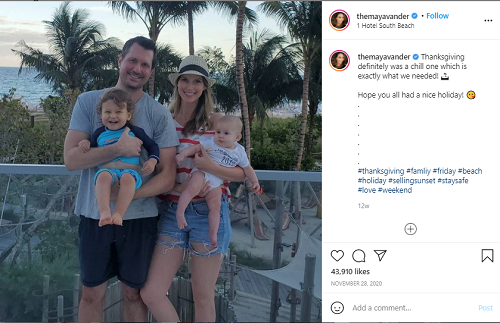 CAPTION: Maya with her husband and kids SOURCE: Instagram

As of now, Maya and Dave are blessed with two kids. Their first child, son Aidan, was born in April 2019, and daughter Elle was born in May 2020.