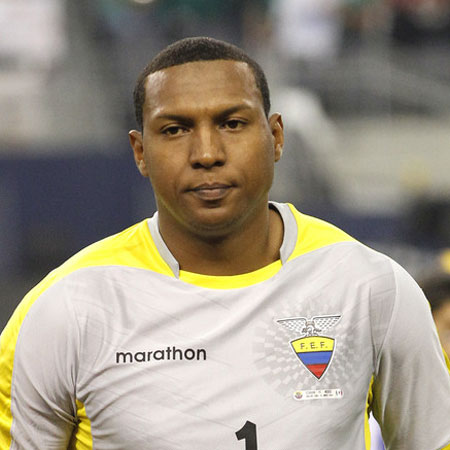 Maximo Banguera is an Ecuador Goalkeeper .He was born in 16th December in the year of 1985.He is not only a goalkeeper for his nation Ecuador but also a goalkeeper that plays for his current team Barcelona Sporting Club and he plays in the field with Jersey No.1. He actually started playing football from a very early age. He used to engage himself in local football games while he was child. He also participated in several games of football back in his school and high school. His parents supported him for his decision to become a professional football player.

He has been starting as a goalkeeper for the national team of Ecuador. In 2008 once he was called up to play the game which was against Mexico and he happened to give a very best of him throughout the match. He played for all 90 minutes and his performance in the game was really appreciated my most of the football critics and supporters. Before Banguera got a chance as a the first choice Goalkeeper, Marcelo Elizaga was the goalkeeper. Following the retirement of him ,Banguera got an opportunity to  be the first choice Goalkeeper for Ecuador. But due to his injury he couldn’t make appearances in most of the games of 2014 FIFA World Cup Qualifiers.

The 30 years old goalkeeper Banguara has his own story of struggle. He is quite kind of guy who is not interested in exposing his personal issues and relations in the media. There are rumors of some relationships or sometimes he is seen in some restaurants or café with some girls but actually they happen to be his friend or sister. So basically there is no strong evidence regarding his marriage or any ongoing affair evidence. But people close to him say that the 3o year old goal keeper is a very charming and romantic person .Apart from that he is personally a good human being. His height is 1.83 m tall and his weight is 78 kg.

He has not yet claimed much of  special titled trophy because it has just been few years that he has joined the International pool of professional footballers. He was once honored with the Champion title in 2012 while he was playing with the club . He has saved many goals and he has also conceded many goals. He is one of the rising players and soon he is going to get a new platform to prove himself to be one of the extraordinary players in the team. Although he had 2014 world cup to prove himself a potential player to the world but he has been undergoing some injury and that makes it pretty unsure if he can make it up to Fifa World cup In Brazil .His Salary is around USD#1.1 Million .