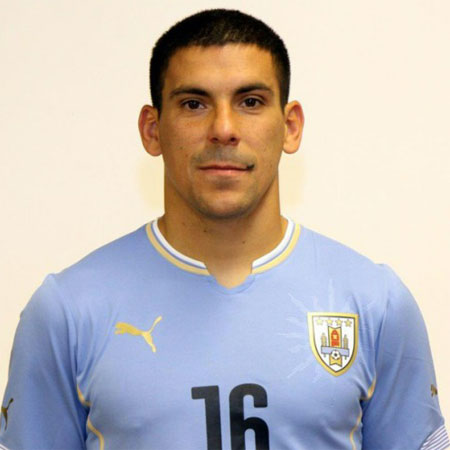 Victorio Maximiliano “Maxi Pereira Paez better known as Maxi Pereira is an Uruguayan footballer who is currently playing for Portuguese club FC Porto and also played for S.L Benfica in the Portuguese first division positioning as a right defender. Pereira is also a part of the Uruguay national team and has represented the Nation in 2 of the World cups and many of the Copa Americas’. He plays as a Defender in the national squad. He was born on 8 June 1984 in Montevideo, Uruguay.

Pereira began his professional football career at 18 years of age for the team Defensor Sporting in early 2002-03 season. In 2005 campaign he scored his career-best 16 goals in the first division. After 2006-07 season he Moved to S.L Benfica. Pereira failed to adjust to the position of a right midfielder he was initially given in his first year at the club.

However, he scored two goals, one against Boavista F.C and the other against A.C Milan. Pereira got back to right-back in the next campaign. S.L Benfica won the league after five years in the 2009-10 season. Pereira appeared in 40 matches scoring five goals in 2,932 minutes of action time he got.

He also scored two goals against FC Zenit Saint Petersburg in the 2011-12 Champions League in the round of -16. Benfica went on to the quarterfinals of the competitions. He has been with the club in about  300 officials games and as many as six major titles win.

Since 26 October 2005, Pereira has been representing Uruguayan national team. He first match for his Nation was a friendly against Mexica. He also was in the national team competing in 2007 Copa America. He scored his first international goal against in a 2-3 loss against Holland.

The goal was made in the 91st minute. Pereira was also selected in the national squad for 2010 FIFA World Cup. He was an important part of the national team in the 2011 Copa America which, his national team Uruguay grabbed for the 15th time.

Any information about Pereiro’s romantic life, either a wife or girlfriend is kept out of public and media. He is a very well built South American player with a height of 1.73m and an accompanying weight of 70 kg. He wears a No.14 shirt in his current team S.L Benfica. Pereira is 29 years old.

International titles include Copa America in 2011 with Uruguay national team.  His annual salary is 627,000 Euros. Pereira’s market value is worth 9,000,000 Euros.