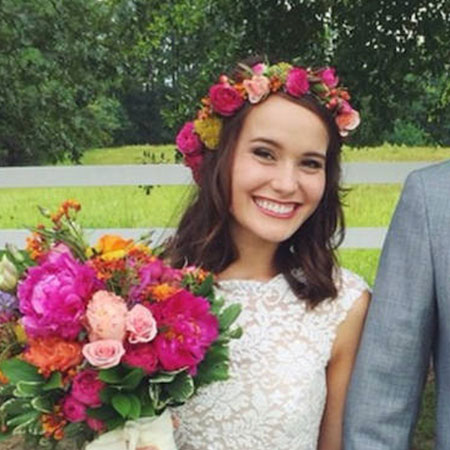 Mary Kate McEacharn is an American Blogger and social media star who came to limelight after marrying a popular television personality, John Luke Robertson. John is famous for appearing in the famous American reality television series 'Duck Dynasty'.  After dating for a few years, the couple married in 2015.

Mary Kate McEacharn was born on May 20, 1996, in Delhi, Louisiana, the United States of America under the zodiac sign of Taurus. She spent her childhood with her younger sister in Louisiana. While living in Louisiana she was sent to Vacation Bible School and the school established strong religious beliefs in her mind.

She really loves spending time with her family and often features them in her blogs. Lyme Disease had a major impact on her family. She along with her mother and sister tested positive for Lyme disease when Mary was in middle school.

On November 25, 2010, Mary Kate McEacharn joined Twitter and after she got engaged with an American reality television star her popularity started to increase.

Wish I could be little again and try out a year of summer camp here!!! @winshapecamps thanks so much for having me come speak last night! What an honor and a privilege to get some time with your sweet girls! #castleonthehill

It was the moment she started to became a social media star. As of 2019, she has 29.4k followers on her Twitter account and has 692k followers on her Instagram. She especially posts pictures of her during a vacation with her family and friends so that her followers can get an update of her personal life.

Not only she is a social media star she is even recognized as a successful blogger. Her blog goes with the name of  'The Little Duckwife'. She has described her family's ordeal with Lyme disease in her blog which caught many peoples attention as it was really heart-wrenching. On her blog, she also writes and post photo of various categories such as travel, family, fashion, liberty, and wedding.

She writes regularly on her blog making sure her followers are always up to date about her life.

Mary Kate McEacharn is a successful blogger as well as a social media star. With her success, she has earned some decent amount of money. As a blogger, the average money they earn per year is about $19k to $79k, while according to the source the 14% of bloggers earns about $24k to $33k per year.

She has a pet dog named Timber.

Fun fact: I have a weirdly long tongue. So does Timber. This picture really doesn't do either of us justice though haha any fun/ weird facts or party tricks?!

To talk about her husband he has a net worth of $400,000. As a reality tv star, he has collected a considerable amount of money by appearing on Duck Dynasty and form his books too. Some of his books names are:

To talk about Robertson family they have a net worth estimated of $400 million.

Mary Kate McEacharn is a married woman. She tied the knot to John Luke Robertson in mid-2015 when Mary was just 19 years old. They two first met at a Christian summer camp in 2010.

Their marriage was featured in the tv show 'Duck Dynasty' which received more than three million viewers.  Mary and Roberts' shares a blissful relationship which we got to witness after John wrote the books 'Young and Beardless: The Seach of God, Purpose and Meaningful Life' which was inspired by their relationship.

As the video shown below, Mary Kate and John Luke married was featured on a tv show called Duck Dynasty.

You May Also Like: Kyrzayda Rodriguez, Sophie Cachia, Michelle Malkin.