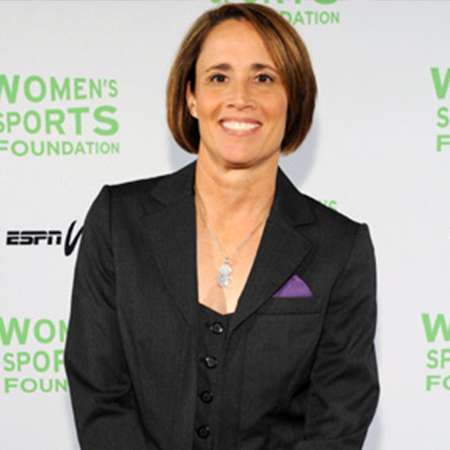 Mary Carillo is an American sportscaster as well as the former professional tennis player. She is also a sport analytic for numerous channels including Olympics. Carillo won various awards & titles and also the author of many books. She is now an established personality with good earning.

Mary Carillo was born on 15 March 1957, in Queens, New York, U.S. She belongs to North American ethnicity and holds an American nationality.

Carillo has a sister, Gina Carillo, an actress and also has a brother, who is an author. Her cousin, Mike Francesa is also sports-radio host. Carillo went to the  St. Mary School.

Mary Carillo began her career as tennis from 1977 to 1980 and played professional tennis. She was one of the best tennis players in the nation.

Carillo ranked 33 in the Women's Tennis Association Rankings in 1980. She is the winner of  French Open mixed doubles title along with John McEnroe. She retired from the game due to her knee injury.

Carillo is also a former BOD member of the Women's Tennis Association. She was a tennis analyst in various countries including the Olympics too.

Carillo is known as one of the popular commentator and a host of various TV networks. She worked as a host, sports analyst, and commentator in shows such as - HBO, ESPN, NBC, TNT, CNB, and Bravo.

Carillo also appeared in the romantic-comedy movie, ''Wimbledon"(2004). She showed her skills in writing too and published many books like- Tennis My Way, Rick Elstein's Tennis Kinetics: With Martina Navratilova and Tennis Confidential II: More of Today's Greatest Players, Matches, and Controversies.

Mary Carillo's hard work led her to win numerous awards. She won the  'Dare To Complete: The Struggle of Women in Sports,' Peabody Award for co-writing HBO documentary, She was named a Broadcaster of the year by Women's Tennis Association.

Mary Carillo got married to her boyfriend Bill Bowden who is an Australian tennis instructor. The couple got married in 1983 and had two children, Anthony and Rachel.

Before dating,  they were a long time close friend. After being for fourteen years long relationship they divorced. The actual reason behind their separation was never revealed. She took the custody of their children, and now Carillo lives in Florida with her children.

After the separation, Carillo has dated some individual which gave birth to rumors about her sexuality. Many of the fans assumed that Carillo was a lesbian because of her husky voice and get up.

Carillo did not address the rumors so we can say she is straight and single.

Carillo is living with her two kids in Naples, Florida.

Also Read, What Is The Current Relationship Status Of The Fan Favorite News Reporter Savannah Guthrie? Details of Her Past And Present Affair

Mary Carillo's Net Worth And Salary

The primary source of her income comes from her career as a tennis analyst and hosting the Tv shows.  She is a sports reporter for NBC Sports and NBC Olympics. As a reporter, she receives the annual salary which ranges between of $56560 to $76259.