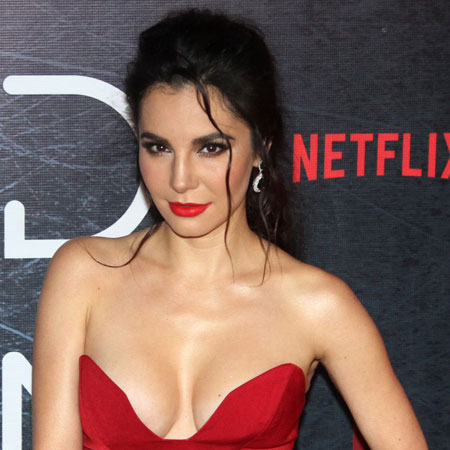 Two times Silver Goddess Awards-winning actress, Martha Higareda gained wide recognition for her role in the highly acclaimed Mexican film Amar te duele. She is a producer and screenwriter as well. Higareda has appeared on many American TV series like CSI: Miami, Royal Pains, and Hawaii 5-0. Her other popular movies include EI Mariachi and McFarland, USA. Higareda is married to her boyfriend Cory Brusseau for around a couple of years and she is living a happily married life with her husband Brusseau.

Martha Higareda was born Martha Elba HIgareda Cervantes in Villahermosa, Tabasco, Mexico, on August 24, 1983, under the birth sign Virgo. She holds a Mexican nationality and is of mixed descent.

Higareda is the daughter born to actress Martha Cervantes and therapist and artist Jose Luis Higareda. She spent most of her early childhood days in Villahermosa along with her three siblings; sister Miriam Higareda, and two brothers Jose Luis Higareda and Luis Daniel Higareda.

Higareda started acting on the stage at a very young age, along with dancing jazz, flamenco, tap, and folklore. She moved to Mexico City to fulfill her professional goal at the early age of 14. She made her theatre debut performing in various plays like Little Women and Don Juan.

At the age of 15, Higareda started her college life; studying communications at El Tecnologico de Monterrey. She made her TV debut working as an anchor hostess in Disney Channel’s Zapping Zone, a 2-hour life show of fun sketches and adventurous exploring.

Martha Higareda's professional career at the age of 16. She got an opportunity to perform on the big screen when filmmaker Alfonso Cuaron came to Mexico City auditioning for Y Tu Mama Tambien and offered her to play the part of Cecilia Huerta, girlfriend in the film. However, Higareda didn’t play the role due to the full nudity scene in the movie.

After being encouraged by Cuaron, she went on to change her major from Communications to the Performing Arts.

Higareda played her first leading role in the film Amar te duele in 2002. The movie became a big hit at the box office. She also won The Silver Goddess award for her performance as the female lead and the MTV movies favorite actress award.

In 2006, Higareda worked in Sexo, amor y otras perversiones along with Carlos Carrera and received another Silver Goddess Award. The following year, she was nominated as best supporting actress for the Mexican Academy Awards for her role in Fuera del Cielo.

Higareda made her first appearance in the Hollywood Industry playing in the film, Borderland alongside Beto Cuevas and Brian Presley. She moved to Hollywood to audition and study script writing in the year 2008.

The same year, she appeared in the crime thriller film Street Kings. She shared credits with Keanu Reeves, Forest Whitaker, and Hugh Laurie as well.

The movie turned out to be a commercial success making a worldwide box office collection of more than $65.5 million against its budget of $20 million.

She wrote and produced her first independent film, Te present a Laura at the age of 25. The movie listed in the top ten movies in box-office for 10 consecutive weeks.

Excited to see fans @SVComicCon in San Jose CA on April 7 & 8. Come see the show and get a hug from me! svcomiccon.com for tickets @AltCarb @netflix @netflixlat

Higareda shot the prequel to the crime/action film Smokin' Aces, Smokin' Aces 2: Assa s sins' Ball. She was honored with the Mayahuel Award for her performance in the movie Mariachi Gringo at the Guadalajara International Film festival. She featured in a TV series Altered Carbon, in 2018.

Famous Mexican actress Martha Higareda has earned a handsome sum of money from her career and as of early 2019, Higareda has an estimated net worth of $1 million. The actual salary of the actress and her other income sources are yet to be revealed. She worked in several movies with an impressive collection.

As per some sources, a TV star averagely earns an average salary of $150k to $1 million.

Actress Martha Higareda is happily married to her boyfriend Cory Brusseau.  The pair has been in a relationship since 2011 when they started dating after their first meeting on the sets of Casese Quien Pueda in LA.

After around five years of relationship, the couple secretly got married in May 2016 in Hawaii in a private ceremony attended by close ones. Martha made an official announcement about her marriage to her sweetheart on the red carpet of the film No Manches Frida. Martha and her husband Cory also appeared together in a video, Who does the dog stay with?

Higareda is aged 35 as of early 2019 and has been married for over two years, however, she and her husband Brusseau are yet to think about children.

Before she started dating her current husband, Higareda was rumored to be dating the blockbuster trilogy The Matrix superstar Keanu Reeves in the year 2007. But the alleged couple didn’t confirm the rumor and it faded away with time.