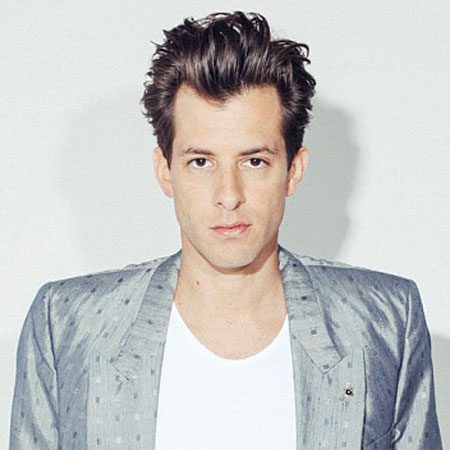 Mark Ronson is an English musician, DJ, singer, songwriter and record producer who was awarded the 2015 Brit Award for British Single of the year and 2016 Grammy Award for Best pop duo/ Group Performance.

The talented singer was born on 4 September 1975 in England. He holds an English nationality and belongs to Caucasian ethnicity.  His parents were Laurence Ronson and Ann Dexter.

Ronson’s parents divorced when he was small and later his mother married Foreigner guitarist, Mick Jones. He has twin sisters named Charlotte Ronson and Samantha Ronson.

When he was just eight years old, he moved to New York city along with his mother, twin sisters, and a step father. He attended private school in Manhattan and then joined Vassar College and New York University.

While he attended New York University, he became regular at downtown hip hop spots and made his name as a DJ on the New York club. He debuted with an album entitled Here Comes the Fuzz which helped him to earn more fame and popularity.

In 2004, Ronson formed his own record label named Allido records and signed rapper, Saigon, at the very first as soon as the record label was formed. Currently, in 2017, he produced an album titled Queens of the Stone Ages.

Musician Mark Ronson publicly dated 5 beautiful women in the past and they all were actress and singers. From 2002-04, he was in a relationship with popular actress Rashida Jones.

The couple was even engaged at one point. However, their relationship couldn’t go for a long time and they ended up their relationship with separation. From 2005-08, Ronson dated an artist, Cosi Theodoli Barschi. Even though the couple has separated, they still remain friends. Ronson also dated Daisy Lowe in 2008 and Tennesse Thomas from September 2008 till February 2009. After separating from her, he met La Baume who he married few weeks ago.

Musician Mark Ronson’s wife Josephine de La Baume has split from her husband. She filed for divorce from the 41-year-old music producer on May 11 citing irreconcilable differences, E news reported. Josephine is reportedly demanding for spousal support, as well as for Ronson to pay her attorney fees. La Baume, 32, said that she separated from him on April 21.

Marks Ronson met La Baume in 2009 and the pair got married in a lavish ceremony in the South of France on 3 September 2011. Their marriage was quite the fashion parade.

The couple’s relatives and friends tagged them in pictures with caption ‘made for each other’. However, Ronson and La Baume are now on the verge of getting a divorce. The exact reason for their divorce isn't known yet.

The popular musician is living a luxurious life. As he has been involved in numerous programs and has released his own albums, his net worth is reported to be around $20 millions.