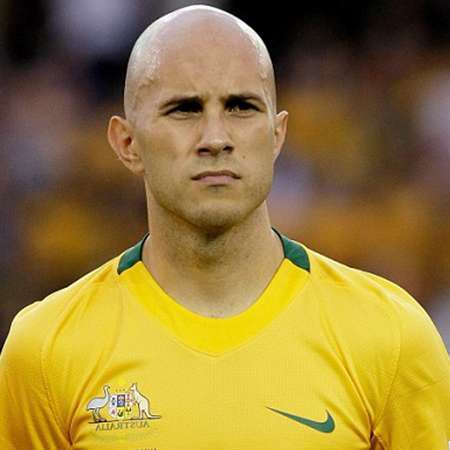 Mark Bresciano is one of Australia’s Nation most talented footballer, who is in the Current Team now for Qatar Stars League side Al-Gharafa as a midfielder. Bresciano was born to an Italian father and a Croatian mother. He was born in 11 February 1980 in Melbourne,Australia.He  is well known for his "Spartacus" way of   celebrating his goal, which involves stopping in the position from where he shot from, clenching his fists by his side and raising his chin. He stands still, usually until mobbed by his teammates.

Mark Bresciano began playing football locally and then later advanced to the first team of Victorian Premier League side Whittlesea Zebras in 1995 , when he was 15 years old. In 1997 FIFA U-17 World Championship qualifying campaign, Mark featured conspicuously in the Australian national team scoring five goals. In 1998 and 1999, Bresciano made many appearances for nation  in various matches at Australia national under-20 football team and Australia national under-23 football team level which included the 1999 FIFA World Youth Championship.  As like many of the Australian players in pursue of  improving his game and career further more ,Mark moved to Italy and joined Parma football club. He also played the 2006 FIFA World Cup. Shortly after the completion of the World Cup, Bresciano was signed on a four-year-contract by Palermo and made regular first team appearances in the Serie A 2006-07 and UEFA Cup 2006-07.Bresciano returned to the national team in February 2008 for Australia’s opening 2010 FIFA World Cup Qualification(AFC) match against Qatar national football team. After Australia’s Asian Cup exit, Bresciano was transferred to Manchester City FC on an agreed contract of four years with a transfer price of £5 million.He than began training with the City squad. On 3rd of July 2010, Bresciano had signed for S.S.Lazio on a contract of two years. He scored first goal for Lazio in the Coppa Italia third round win over Serie B outfit Portogruaro. On 9th of August 2011 it was announced that Bresciano had Signed a contract with UAE Pro-League side Al Nasr SC for $5.4 millon.

Bresciano’s spouse is Renée Capitanio , his girlfriend whom he had been in relationship since childhood . He married her  in Heidelberg,Victoria,Melbourne in the month of May of the year 2006. He has two children, In February 2007, the couple were blessed with their first child, a daughter named Alessia and in May 2009, the couple welcomed their second child, again a daughter ,named Montana.

Mark  Bresciano usually plays football on the left side of midfield but can also play as a forward and in the central or right mildfielder role. Bresciano is a versatile player who often assists in both attack and defence and is also a set-piece specialist. He used  to wear the jersey No.8 but now he wears the jersey No.23 for Australia.  His height is 182 cm and his weight is 76 kg. He earns a salary of 500,000 €. His current team is Al- Gharafa .

Mark  Bresciano represented Australia at all youth levels,where he made the appearances for the 1999 FIFA World Youth Championship and also the 2000 Summer Olympics . Mark was associated with the Australian national football team for several years and had been an integral part in the growth of the national football team as he represented Australia at the 2006 FIFA World Cup aswell as 2010 FIFA World Cup.. He is also included in Australia’s 15 best Soccer players of all time.