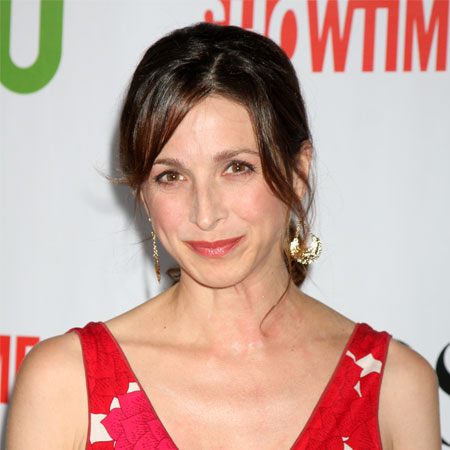 Marin Hinkle, an American actress, is best known for her portrayal as Judith Harper-Melnick on the CBS sitcom Two and a Half Men. She is also known for her appearance as Judy Brooks on the ABC drama Once and Again.

She has been married to her longtime boyfriend, Randall Sommer since 1998. The couple shares a child together.

Marin Elizabeth Hinkle was born on March 23, 1966, in Dar es Salaam, Tanzania. She is the daughter of Rodney Hinkle and Margaret R. (Polga) Hinkle. Her father was a retired school teacher whereas her mother is a judge in Ma s sachusetts Superior Court.

Hinkle's family immigrated from Tanzania to the United States and lived in Boston, Ma s sachusetts. She was just four months old at the time. She has a brother named Mark who was born two years after moving to Boston.

Marin Hinkle has dual nationality i.e. American and Tanzanian and is of Caucasian ethnicity. As a child, Marin dreamt of being a ballerina and studied dancing until the age of 16. She faced an ankle injury that ended the possibilities of being a dancer.

Hinkle was still persistent to pursue her career in acting, but her parents encouraged her to complete her master’s degree so that if things do not go as planned, she can still have a stable career as a teacher.

Marin Hinkle graduated from Newton South High School. She attended the Brown University following her graduation from the high school. She studied at the New York University's Graduate Acting Program at the Tisch School of the Arts and graduated in 1991.

Marin Hinkle started her career in acting from the 1994 play Romeo and Juliet. She made her debut in the film industry as Young Joanne in the 1994 movie Angie. She then appeared in the role of Alison Van Rohan in the soap opera Another World in 1995.

However, her big break came in 1999 when became a regular cast of Once and Again as Judy Brooks till 2002. The soap opera increased her popularity leading to several big and small roles in silver screen as well as television.

The CBS sitcom Two and a Half Men spanned from 2003 till 2015 where she appeared in 83 of its episodes. The series happened to be the one that highlighted her entire career.

Marin Hinkle's Net Worth And Salary

Marin Hinkle's net worth is estimated to be $3 million at present. She reportedly earned $50,000 per episode from the series, Two and a Half Men.

She has appeared in such films as, "Breathing Room", "I'm Not Rappaport", "Frequency", "I Am Sam", "Quarantine", "Imagine That", and "Weather Girl". She is most widely known for her appearances on "Once & Again", "Two and a Half Men", and the short-lived series, "Deception".

She has appeared in the movie, The Haunting of Molly Hartley, which grossed $15.4 million at the box office whereas the movie, Quarantine grossed $41.3 million.

She has appeared on television shows as, "Spin City", "Law & Order", "House", "Brothers & Sisters", "The Sarah Silverman Program", "Private Practice, and "Army Wives" and is most widely recognized for her starring roles on "Once & Again", "Two and a Half Men", and the short-lived series, "Deception".

Marin Hinkle is married to her boyfriend, Randal Sommer. The couple tied the knot in 1998. They first met in 1992 in a theater.

Her boyfriend, Randall Sommer is a New York theater director. The couple has one child together.

Two and a Half Men Once and Again