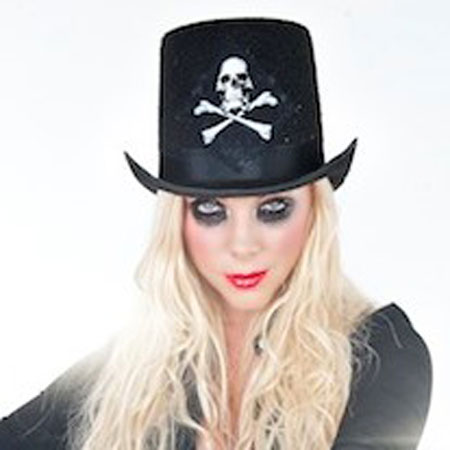 An American singer and songwriter Maria Brink is the lead vocalist and pianist of the heavy metal band, In This Moment who launched their debut album, Beautiful Tragedy, in the year 2007. Brink and renowned guitarist, Chris Howorth set up the band under the name, Dying Star in 2005 and later changed the name to In This Moment. The lady as the frontwoman in the group, Brink, performed live on the album Blood at the Orpheum. She has been awarded "Rock Goddess of the Year" in the 3rd (2013) and 5th (2015) Annual Loudwire Music Awards, "Hottest Chick in Metal" in 2010, one of eleven women in heavy metal who matter by Yell! Magazine in 2012, and was recognized by Revolver Magazine as one of the "25 Hottest Chicks in Hard Rock & Metal".

The singer Maria Brink, was born on December 17, 1977, in Schenectady, New York, United States. Her mother was very supportive and helped Maria enhance her career.

Well, I don't have a father, so there's no daddy being protective of the daughter. My mom is a total free-spirited hippie flower child. Always has been. My mom always supports me in whatever it is that I do, and she loves me.

Regarding her ethnicity, Brink is a White-American and she is of American nationality. She was a member of a group, burnouts, during her high school years.

Maria Brink formed the band called Dying Star in 2005 along with Chris and Jeff. She performed in various musicals with the band and earned huge fame.

Moreover, Maria Brink wrote the song, Legacy of Odio as a tribute to her best friend who died a few years ago. The song was launched in the year 2007.

Her band has released six studio albums and has toured various parts of the world. The other members of the band consist of bassist Travis Johnson, rhythm guitarist Randy Weitzel, and drummer Kent Diimmel.

Maria Brink's Net Worth And Earnings

After getting huge success and releasing some popular songs, Maria Brink must have maintained good finance. According to some online sources, her net worth is estimated to be more than $1 million. She earns a huge amount of money from her band's tours and album sales.

One of the major sources of income is also her Instagram account. As of 2019, the actress has over 399.9 K followers and the Instagram star who has over 100 K followers can command over $5000 a post.

Maria Brink is the lead vocalist and pianist of the band. She is unmarried. However, she has a son named Davion Smith. She gave birth to her son Davion at the tender age of 15. The identity of her child's father is still unknown.

Brink is raising her son as a single parent. The mother-son relationship looks beautiful and motivating. Once in an interview, she quoted,

I think, for me, the biggest challenge is being a mother with my more provocative side. But to me, I'm an artist, and me and my son have a really beautiful relationship.

Her son is also an artist. She was sexually abused by her father in the year 1993. When she was 18, she got a tattoo, which is a small endlessness symbol on her back.

Brink once was in a relationship with her boyfriend, DevilDriver's member, Jonathan Miller, and split up in the year 2010. As of 2019, she is single and is focused on her career, rather than being in a relationship or having a husband. The artist has kept everything secret about her love life, affair, and boyfriend.

Besides, Maria is also an accomplished painter and frequently does custom painting for her Wonderland site. She is an activist and an active member of the PETA campaign and is a self-proclaimed vegetarian. Other than that, Brink’s favorite band is the Deftones, and her favorite vocalist is Chino Moreno.