Marc Mezvinsky: An American Investment Banker; How Much Is His Net Worth? Career and Achievements 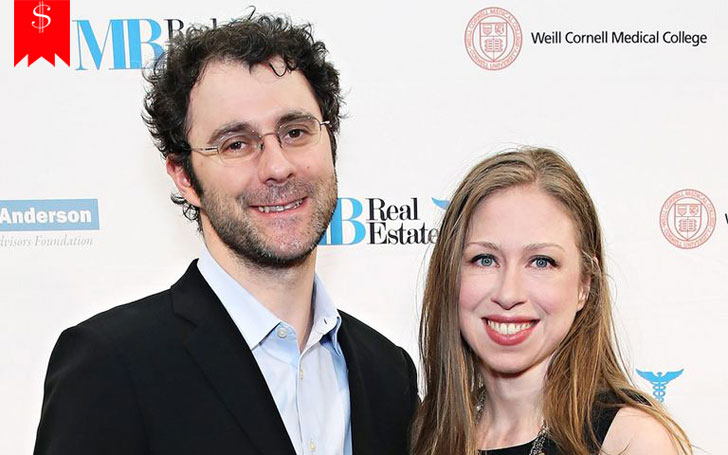 How much is the current net worth of Mezvinsky? What is his source of income? We have all details about  Mezvinsky's net worth along with the assets here.

How much is Marc Mezvinsky's Net Worth? Income Source?

The 40-year-old investment banker Marc Mezvinsky's estimated net worth is $15 million, according to celebrity net worth. The co-founder of the hedge fund Eaglevale Partners has earned such an impressive figure from his career as an investment banker at the New York-based firm Goldman Sachs.He added more to his net worth from the income at 3G Capital which is a New York hedge fund company.

He also co-founded the Eaglevale Hedge Fund alongside his partners Bennett Grau and Mark Mallon in 2011. Mezvinsky, however, decided to close the company in 2016 due to 90% loss in its value. Currently, he serves as Vice Chairman in Social Capital.

Marc Mezvinsky with wife Chelsea Clinton in an event

His wife Chelsea Clinton, the daughter of former President Bill Clinton is also an owner of a hefty amount of money herself. Her estimated net worth is $15 million according to Celebrity Net Worth.

The huge part of her net worth is accumulated from her service in McKinsey & Company and Avenue Capital Group. From 2011 to 2014, she also served as special correspondent for NBC News and she was paid around $600,000 for her service in NBC.

She is also on the board of a digital media company named IAC/InterActiveCorp and according to a source, in 2011 she earned annual retainer of $50,000 and a $250,000 grant of restricted stocks. Further, she also served on the board of other organization like School of American Ballet, Clinton Foundation, Clinton Global Initiative and many other.

Mezvinsky and Clinton own an apartment in The Whitman building on Madison Square Park in the Flatiron District of Manhattan. The pair brought the 5,000-square-foot assets in 2013.

Marc Mezvinsky,40, and his wife Chelsea Clinton,37, own $10.5 million worth apartment

The $10.5 million worth apartment consists of four-bedrooms and five-and-half bath along with 10-foot ceilings, oak floors. The Italian marble bathrooms and elevator access also gave the apartment a classic touch.

Reportedly, he owned $3.8 million apartment in Manhattan in 2008 prior marrying Clinton.

Mezvinsky and Clinton had one of the most expensive weddings ceremonies in 2010. The lavish an interfaith ceremony was held in at the Astor Courts estate in Rhinebeck Rhinebeck, New York, estimated to be of between $2 million and $5 million.