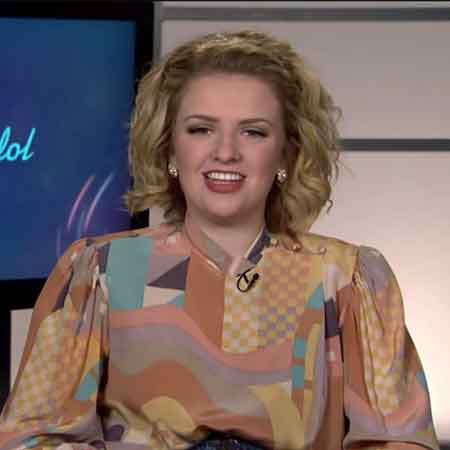 American singer and musician, Maddie Poppe rose to fame after winning the title of American Idol season 16. Before appearing on the Idol, she gave an audition for The Voice, season 10 but none of the judges turned their chair so, was eliminated. Regarding her personal life, Poppe is in a relationship with a runner-up of American Idol, season 16, Caleb Lee Hutchinson. The couple announced their relationship during the last 15 minutes of the finale.

Maddie Poppe was born Madeline Mae Poppe on 5th December 1997 in Clarksville, Iowa under the birth sign Sagittarius. Poppe is the daughter of Trent Poppe (musician and guitarist) and Tonya Poppe. Her parents raised her with her siblings, two sisters Hannah Poppe and Emma Poppe.

When Poppe was young, she was interested in singing and used to perform for her family with her father. Regarding her academics, she graduated from Clarksville High School in 2016 and later joined Iowa Central Community College and Hawkeye Community College.

Initially, she used to perform on RAGBRAI (Register's Annual Great Bicycle Ride Across Iowa) which is a non-competitive bike ride popular in her home state. Poppe also used to perform with her father's band at Pioneer Days. Moreover, she along with her sister used to perform in the local theater.

In 2016, Maddie Poppe released her debut album, Songs from the Basement. The same year, Poppe opened for famous America country and Christian country music band, Diamond Rio at the fair.

The same year, she also auditioned for the NBC's reality show, The Voice, season 10 where she sang ''Dog Days Are Over'' but none of the judges, Adam Levine, Pharrell Williams, Christina Aguilera, and Blake Shelton turned their chair so got eliminated.

Poppe rose to fame after she entered the biggest reality show of all time, ABC's American Idol, season 16. In 2018, she auditioned for the show where she sang, ''Rainbow Connection.'' On 12st May 2018, she won the title of American Idol season 16 whereas her boyfriend Caleb Lee Hutchinson came runner-up.

After her victory, she released her single, ''Going Going Gone'' which hit #3 on the iTunes US Overall chart and also hot $2 on the iTunes US Pop Charts. Her works helped her to get nominated for People's Choice Awards in a category of Competition Contestant of 2018.

Maddie Poppe's net worth is estimated to be in millions, as per some online sources, however, the amount is still under review. According to several online sources, a winner of American Idol gets a contract with Hollywood Records and the cash prize of $250k.

But as per The New York Times, the winner could receive minimum $650k. The report also says that the winner will receive an advance on a record contract deal of $100k to $150k.  If we believe the sources, she must have recieved the mentioned amount.

Maddie Poppe is not married yet but is in a relationship with another contestant of American Idol season 16, Caleb Lee Hutchinson. The couple started their affair before the show was aired. They hide their relationship for the entire season and revealed it during the last 15 minutes of the finale. Her boyfriend said,

''Well, Maddie is my pal and I’ve known her since the beginning of Hollywood week. And she actually happens to be my girlfriend.''

In the several interviews, when Poppe was asked several times about why they waited so long to reveal. She replied,

''Honestly, I wanted to announce it ASAP, just because I was proud of it. He wanted to wait because of he… Well, he did say he wanted the single women to vote, and I understand that.''

After the show, their relationship grew stronger and started touring together.

Check out the interview with Maddie Poppe: