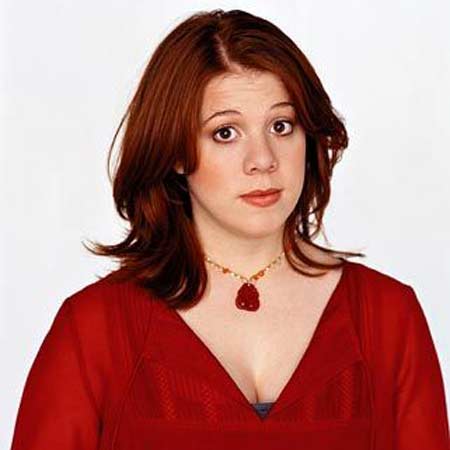 American actress, dancer, and singer, Lynsey Bartilson is known for playing Lily Finnerty on the American television sitcom, Grounded for Life. She has appeared in the number of popular television series including Married...with Children, That '70s Show, Malcolm in the Middle, Good Luck Charlie, and Joan's Day Out. She is also an international Spokesperson for Youth for Human Rights. She can also be found on the YouTube channel in several sketches such as hosting duties, Girl With the Dragon Tattoo parodies, and whatever this is.

She is married to her longtime boyfriend, Cru Moore. The couple began dating back in 2014 and tied to knot on 4th September 2016. They have a son Robert Camden Moore, born on 10 September 2016. The family of three resides in Los Angeles.

She made her television debut at the age of seven in 1990 when she hosted the show Kidsongs and made her acting debut after appearing in one of the episodes of the NBC sitcom The Good Life. The following year, she was featured in the American television sitcom, Married... with Children as Megan.

Bartilson then made her appearance in the number of television series, The Faculty, Moloney, Suddenly Susan, Zoe, Duncan, Jack and Jane, The Amanda Show, and many more.

After that, Bartilson grabbed her first leading role as Lily Finnerty in the American television sitcom, Grounded for Life from 2001 – 2005. She starred along with Donal Logue, Megyn Price, Kevin Corrigan, and many more.

She also worked in several other popular series including, That '70s Show, The Nightmare Room, Judging Amy, Strong Medicine, and many more. She also gave voice to an American animated television series “The X’s” from 2005 to 2006.

Lynsey Bartilson’s Net Worth And Salary

Lynsey Bartilson's net worth is estimated to be in millions, however, the actual amount is still under review. She has earned a decent amount of salary from her career.

She has appeared in the movies and TV shows including Good Luck Charlie, The Online Gamer, Struck, Bones, NCIS, Malcolm in the Middle, The X's, NYPD Blue, Strong Medicine, The Nightmare Room, That '70s Show, and Grounded for Life.

Her other roles include Early Edition, Any Day Now, The Amanda Show, Party of Five, Suddenly Susan, When I Was a Boy, 7th Heaven, Moloney, A Rat's Tale, and Mrs. Santa Claus.

She has been in the acting field since 1994 and made her appearances in several series. She is also involved in various endorsements which adds more to her value.

Lynsey Bartilson is married to her longtime boyfriend, Cru Moore. The couple began dating back in 2014 and tied to knot on 4th September 2016. Their wedding ceremony took place at a church in front of their close ones.

I got to make it official with my best friend and man of my dreams yesterday!! I love you @dr_cru! Thank you to our amazing family for making it so special and our friends that were able to jump on the train so last minute! We love you all! And a special shoutout to @thereelmarcus who took some unreal pics. what a special day #cruseyshotgunwedding

On their big day, Lynsey Bartilson wore a white gown while her spouse was on the grey color pant and matching waist coach.

CAPTION: Lynsey Bartilson with her husband and son SOURCE: Instagram

The pair is blessed with a son Robert Camden Moore, born on 10 September 2016. The family of three resides in Los Angeles.