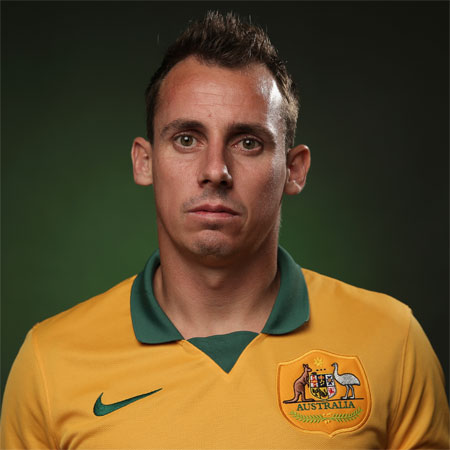 One of the boundless Australian football players who play for in the Russian Premier League is Luke Wilkshire. He was born on Wollongong, Australia on 2 October 1981. His height is 1.76m and weights about 72kg. He is currently 32 years of age and he is in the club for since 2008 and has the contract until 30.06.2012.  He is involved with the current team of Australia National Association football team and FC Dynamo Moscow.

Luke Wilkshire is able to represent Australia at youth level from early in his career, playing in the 2001 FIFA U-20 World Cup in Argentina, and then in 2004 Athens Olympic Games. He usually plays as the defender at the right back with the jersey No.23. He has represented 79 times for the Australian national team also scored eight goals for his team. In 2012, he signed an extension 2-year deal USD $10 Million salary with the team. He is the right-footed defender and currently, his market value is 2.500.000 €.

Luke Wilkshire started his football with the hometown club Albion Park while he was attending Albion Park High School. He stared at the regional level club by joining with the Wollongong Wolves and he stayed several seasons there.

Luke Wilkshire got chance to be the part of the AIS football program, which is Australia's elite sports academy; he traveled to overseas as a part of the Middlesbrough's youth system. He made a couple of the senior appearance at the FA cup semifinal but couldn’t establish himself so Luke Wilkshire finally decided to move his football career as Second Division club Bristol City.

In 2006 FIFA World Cup he was able to get a trial and finally as subsequent three-year deal with Dutch top flight club FC Twente, During his time for the first time in the history of the club, FC Twente was able to qualify for the preliminary round of the Champions League competition. He then on 26 August 2008 moved to Russian side Dynamo Moscow for a reported €6 million transfer fee. He scored the first goal for Dynamo from in a penalty on 27 September 2008, while playing against Krylya Sovetov in Samara, Russia.

Playing at right back, Luke Wilkshire was vital in 2010 FIFA World Cup, coming forward by sending in a total of 18 crosses for the tournament and he played all the three group games for Australia. Luke missed Australia's final group-stage game against Bahrain due to injury played in the 2011 Asian Cup Finals in Qatar.

The readers, commentators and blog writers commented on football websites, Wilkshire's nickname as "Long Ball Luke" because of his perceived fondness for kicking long balls, rather than passing.
He has made some good friends particularly the foreign fellows such as Brad Jones, Mark Schwarzer, Juninho, Joseph-Desire Job and Szilard Nemeth.

He loves to spend a lot of time on the bench. His girlfriend is Sally. He thinks that the future looked uncertain and also enjoys to talk on every details and topic with the Steve McClaren who is now manager at Middlesbrough.

Stating his personal life and work he once said “there are many highs, but there are probably twice as many lows. You have to take a lot of difficult times, but it makes you  the player that you are.”  Similarly, in one interview with the newspaper he states “: To the captain, your country would be a dream. It’s something every footballer from a very young age would dream of doing, and i’m no different”.