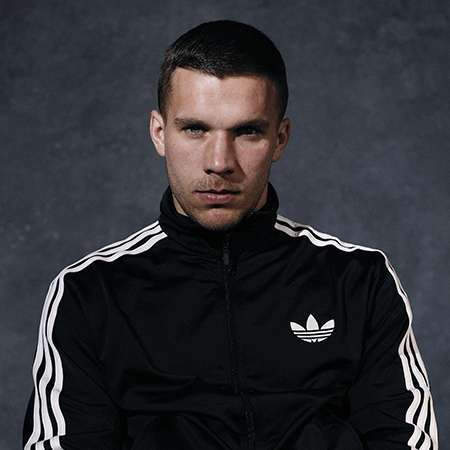 Lukas Podolski, full name Lukas Josef Podolski is a German Footballer who is playing Forward  for he Current Team of Arsenal, a Premier League club . He also plays for the National team of the nation Germany. He was born in 4 June 1985 in Gliwice, Poland. He is left-footed attacker who is admired for his strong shot, technique and probing attacks from side.

Podolski started playing football at the age of six with the youth team of FC Bergheim and played until he joined 1.FC Koln in 1995. His skills and talents are best reviewed  in that club.On 2003 he made his debut with the senior team. He played his best with the  club until 2006, when he was transferred to Bayern Munich to play in the season 2006-07. He played  on the Bundesliga first on 11 August 2006. After being a s sured by the national team’s coach Joachin Low that if he returned to FC Koln, it would not harm his chances for international  football  , he was again transferred to 1. FC Koln in a transfer  fee around 10 million Euros. Koln made a website where they sold pictures of Lukas Podolski for 25 Euros per 8x8 pixel square, to gather 1million Euros to reduce the cost of Transfer. Koln’s supporter and Formula one driver , Michael Schumacher bought several pixels of Podolski’s Pictures to help for nearly 900 Euros. He played there until 2011-12 season , and then he was linked to the Premier League club Arsenal . He was officially transferred to Arsenal on 30 April 2012 for an undisclosed fee.

His several Bundesliga play made a good impression to the News media , as the Polish national coach Pawel Janas denied to put him in the Poland National team, he was called up in the German national team on 6 June 2004. Podolski played Euro 2004 with the German team, where he was the youngest among the team. He was also selected ithe national squad for the 2006 World Cup. He also played Euro 2008 , 2010 FIFA World Cup.

Podolski’s Spouse is  Monika Puchalski. He is 1.82m taller in Height and has 83 kg  body Weight.

With the national team of Germany , they came up in third position in 2006 and 2010. They also stood Runner-up in UEFA European Football Championship in 2008.

He also became FIFA World Cup Best Young Player in 2006. He was also honored with UEFA Euro 2008 Team of the Tpurnament, UEFA Euro 2008 Silver Boot. He has be awarded Silbernes Lorblatt in  2006 and 2010. He also has been Second Bundesliga top goal scorer in 2005.

His Salary is 7 million GBP.