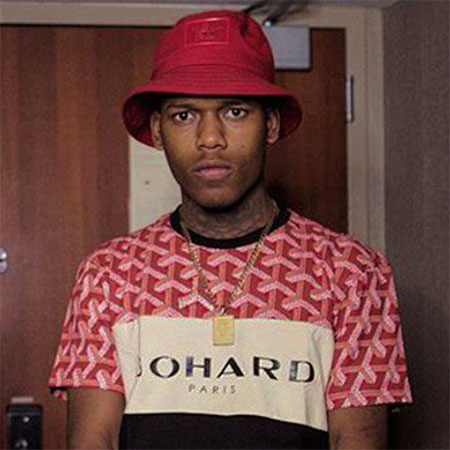 Lud Foe is a drill rapper from Chicago, Illinois who became immensely popular in 2016, after releasing his singles ‘Im Da Man’ and ‘Cuttin Up.’ Foe’s career in music started in 2015 after making an impression in the rap game.

Born on July 15, 1996, in Chicago, IL, US, the rapper Lud Foe was raised by his parent on the west side of Chicago, Illinois. His childhood was miserable as he grew up in a dangerous neighborhood, where he used to carry a gun every day.

Foe drooped out of school after getting into a fight with one of his fellow high school students when he was 15. Regarding his nationality and ethnicity, Foe is a Black American.

Lud Foe began rapping at the age of 4, after being inspired by his older cousin who was always good at music. During his early rapping days, he used to listen to a variety of gangsta rappers, such as Ice Cube, N.W.A, Three 6 Mafia, Gucci Mane, and Master P as well.

Foe met fellow Chicago native Kid, Wond3r, at a tattoo shop as a teenager. At the time, he also told a tattoo artist about how he used to write multiple raps in a day. The duo later exchanged their numbers and finally, Foe released his first song in collaboration with Wond3r.

Furthermore, Wond3r has produced a number of Lud Foe’s tracks. He began gaining popularity, particularly with his music videos at the beginning of 2015. He earned a huge fame in the year 2016, after launching the all-time hit singles ‘Im Da Man’ and ‘Cuttin Up.’

The same year, Foe also released a mixtape called ‘Boochie Gang.’ As of November 2017, one of his popular song ‘Cuttin Up’ has received more than 22 million views.

The American rapper, songwriter, and internet personality for Chicago, Lud Foe, 21, is yet to be married and doesn’t have any children. Lud has never officially involved in a relationship and has not revealed anything regarding his dating, affair, and girlfriend.

Lud Foe was involved in a tragic car accident, on March 5, 2017. He crashed with an 18-wheel semi-trailer truck, after an argument with the truck driver. He was with his friends that night at the Hillside Bowling Alley and involved in a serious car accident at about 3:00 am.

Lud Foe has gained worldwide recognition and reputation for his numerous hit songs like ‘Im Da Man’, and ‘Cuttin Up.’ Foe has earned a considerable net worth from his career as a rapper though he has not revealed the official amount in public.

As per some online sources, Foe’s estimated net worth is believed to be over $1 million, in 2017. Lud has an attractive black colored BMW i8  that cost him around $144,395. Moreover, one of his popular song ‘Cuttin Up’ has received over 22 million views on YouTube.

Besides, Foe has an immense passion for shoes. He posts a variety of shoe pictures on his Instagram and most of them are of King of the Dot company also known as KOTD.