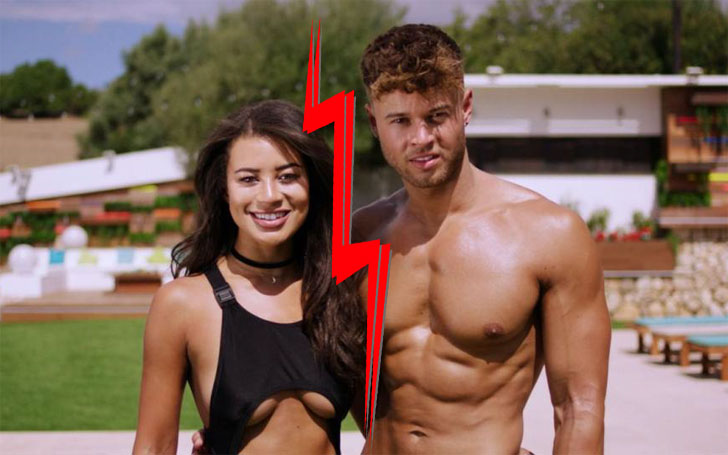 Montana Brown and Alex Beattie were one of the fan-favorite couples of the third series of ITV dating series Love Island. But they remained unlucky since they couldn't win the show. In case you missed it, Kem Cetinay and Chris Hughes won the title.

Brown and Beattie who started dating on the show Love Island, broke up recently. The news of their break-up came out happened just a few weeks after the show ended. Some sources claimed that Brown and Beattie secretly ended their relationship just a day after they were dumped from the show. What is the truth? What is the reason for the break-up? We have all the answers here.

Love Island's Montana Brown and Alex Beattie are no longer together. Brown and Beattie who met on the sets of the third series of ITV dating reality show Love Island, broke up just a few weeks after the show wrapped up.

"Alex and I have decided to split. Making our relationship work on the outside has been hard. He hasn't been the same since coming out of the villa. Despite this we are still close and I will always support him."

Beattie also quickly replied to her tweet admitting it was a mutual decision. He wrote in his tweet:

"Me and Montana met yesterday and have decided that it's best to call it a day with relationship with each other. It's been very hard on the outside to make us work how we desired. I still have strong feelings towards her and will be remaining close friends and supporting her throughout everything."?

The speculation of their break up sparked after Brown admitted to The Sun Online :

“We are doing our thing at the moment. I don’t know if we will have time or be able to do any joint shoots in the future.”

Just a day after their break up, Brown broke her silence and revealed the reason for her break up. In an Instagram live video she explained:

Ambitious and a career oriented woman, Montana Brown, had previously admitted that she was on Love Island only for the fame. And her dreams are now going to be true as she has already signed as the brand ambassador for Pretty Little Thing. Hunky Alex has also signed a modeling contract with Boohoo.

Montana Brown and Alex Beattie met on the set of the third series of ITV dating reality show Love Island. Earlier in the show, Brown failed to maintain a romantic relationship with her partner but things changed after Alex Beattie entered the show. Their romance bloomed after spending a romantic date and a night together in the Hideaway.

The couple even had a physical relationship on the show, becoming the third couple to make love on the villa after Kem and Amber, and Jess and Dom. During the time in the villa, Brown shared that she wanted to have a baby with Beattie. All that love ended pretty soon.

Brown and Beattie were dumped from the show just one day before the finale on 21 July. They were dumped since they got fewer public votes than remaining couples. Also during the vote out process, three couples, Gabby and Marcel, Chris and Liv and Jamie and Camilla voted them out.

Just after being dumped from the show Brown had made clear that she isn’t in love with Alex Beattie despite him expressing his feeling towards her in an awkward conservation.

Online source The Sun also claimed that Montana Brown’s feelings were never genuine and she faked her feelings on the Show. A source close to Alex said to the Sun:

“Montana had everyone fooled. She played a game in the villa and Alex is only beginning to  realise  that now."

The source revealed that Brown reject to post her pictures with Beattie on social media.

"The only pictures on her page of Alex and her were uploaded by friends and family when she was still in the villa.

Apparently, it was reported that Brown and Beattie broke up secretly and had not seen each other after leaving the villa, however,  the pair reappeared as a couple in Love Island reunion show.