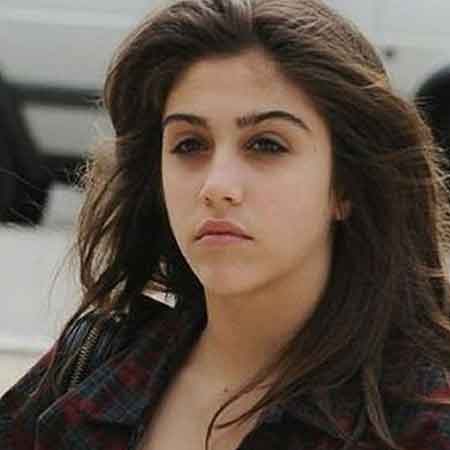 Lourdes Leon is a rising American model and a minor celebrity who is well known for being the daughter of the American pop singer Madonna. Although she hasn't had much of a breakthrough in her career she has still managed to gain the attention of the media by appearing in two of Madonna's doc u mentary Madonna: Celebration – The Video Collection and I’m Going to Tell You a Secret.

Lourdes Leon was born in Los Angeles, California on the 14th of October, 1996. She is the daughter of the Queen of Pop, Madonna and actor and celebrity personal trainer, Carlos Leon.

Her nationality is American, while ethnicity is mixed comprising of Cuban, Italian, and French Canadian.

Leon is the eldest daughter of Madonna. She also has a half-brother Rocco, from her mother's marriage with Guy Ritchie. She is also an elder sister to four other kids namely David, Esther, Mercy and Stella who were all adopted by Madonna from East Africa. Further, she has another brother named Meeka Leon, from her dad's side.

What I am Most THANKFUL for! My Children have led me down roads and opened doors I never imagined I’d walk through. Fame , Fortune and Records Broken could never equal that which I treasure and value most. #blessed #grateful #children #family Happy ThanksGiving from Malawi!

Lourdes spent the major part of her childhood in England and later moved to New York, where she attended Lycee Francais de New York. She later enrolled in Fiorello H. LaGuardia High School of Music & Art and Performing Art and graduated in 2014. She has also attended the University of Michigan.

There are no exact details regarding when Lourdes started her professional career, but she was featured in Madonna's doc u mentaries; I’m Going to Tell You a Secret (2005)and Madonna: Celebration – The Video Collection (2009).

Lourdes started her modeling career in 2018 when she walked at the Gypsy Sport’s Spring 2019, New York Fashion Week. Her appearance was quite notable as she appeared in white sneakers, torn up jeans and a bra s siere, crafted out of a sea-shell, which barely covered her chest.

She has also worked with designer Stella McCartney and was part of the photo shoot by Erin Magee in her Converse x MadeMe.

Leon is also credited for her contribution to the kid's book The English Roses, written by Madonna, former lover of late Tupac. Together, Madonna and Lourdes Leon, own a clothing company called Material Girl.

Leon's net worth is still unknown and hasn't been calculated yet. The salary she received from her different modeling projects are also undisclosed, but she has a wealthy mother, who has an estimated net worth of $800 million. Her father Carlos Leon, also has a net worth of $5 million, a part of which Lourdes might be entitled to.

Lourdes, 22 (as of 2018) is dating a mysterious man, who is speculated to be a skater as per their photos. The couple has been a s sumed to be dating since July of 2016. Leon, however, has not revealed the name of her mystery man.

Prior to this relationship, she had an affair with her high school boyfriend, actor Timothee Chalamet. The pair started dating in the year 2013, but the relationship didn't last much longer and they officially broke up in 2014.