Lathan Moses Stanley Echols, known professionally as Lil Mosey, is an American rapper, singer, and songwriter. He has released two studio albums, 2018's "Northsbest" and 2019's "Certified Hitmaker" and is most known for the hit single, "Blueberry Faygo".

Lil Mosey is multi-ethnical, with his mother being white and his father being part-Puerto Rican and part-Black. By nationality, the 20 year old is an American.

Lathan attended Mountlake Terrace High School in his hometown before transferring to Shorecrest High School in Shoreline, Washington during the tenth grade.

He never got around to graduating and instead moved to Los Angeles to become a rapper following the success of his song "Pull Up".

Career Insight: WHat Is He Best Known For?

Lil Mosey began rapping in his early teens and uploaded his first song, "Pull Up", to SoundCloud in 2016. The song was a big enough success that Lil Mosey dropped out of high school to pursue his music career. The song warranted a music video, which was released to YouTube and has since ama s sed over 34 million views. 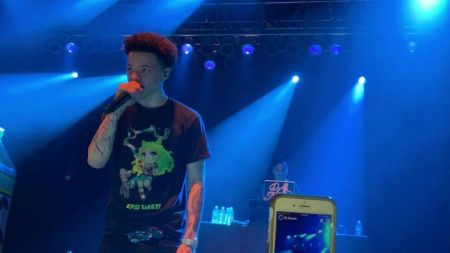 His mixtape, "Universal", will serve as a precursor to his upcoming third studio album, "The Land of Make Believe".

He has released sixteen singles to date, the most famous being "Blueberry Faygo", off of his second studio album, Certified Hitmaker. The single was released in February 2020 ahead of the release of Certified Hitmaker and peaked at #8 on the Billboard Hot 100, making it his highest-charting single to date. The song has been certified platinum by the RIAA and the ARIA.

Lil Mosey has toured with such artists as Lil Tjay, Smokepurpp, Juice Wrld, and Lil Xan.

His main source of income is his songs and albums. Likewise, he also grabs an impressive sum through his record sales, touring, merchandise sales, brand endorsements, and social media presence.

The rising music sensation also makes a good amount with the help of his social medias. He is active on Instagram (4.5 million followers), Twitter (400.6k followers), and YouTube (2.26 million subscribers).