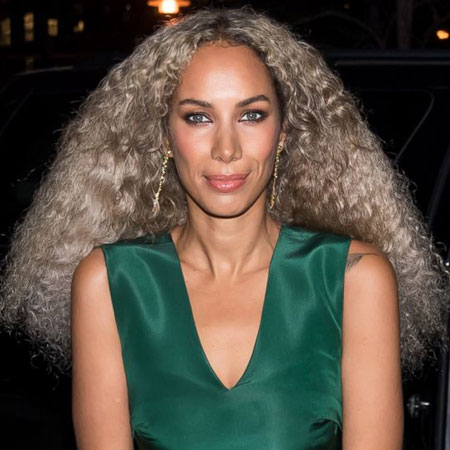 Leona Louise Lewis is a British songwriter, singer, and animal welfare campaigner. Well known for her hit songs and lyrics, Leona Lewis came into limelight after her debut album titled Spirit in 2007.

Lewis also received national recognition when she won the third series of the X Factor in 2006, along with £1 million recording contract with Syco Music.

Leona Lewis was born on 3rd April 1985, in Islington, London, England. Born to her Guyanese father Aural Josiah Lewis and a Welsh mother Maria Lewis, she was raised in the London Borough of Islington. She is of mixed ethnicity and holds British nationality.

Lewis' siblings include a younger brother Kyle, and an older half-brother Bradley. With her immense passion for music and singing, her parents sent her at Sylvia Young Theatre School.

Lewis wrote her first song at the age of twelve. She originally received her training in opera before moving into blues and jazz and eventually into contemporary popular music.

At the young age of 17, Leona Lewis decided to leave BRIT School to pursue her music career. By the time, Lewis had already started to record and write her songs. She worked as a receptionist at solicitor's office as a waitress for Pizza Hut to pay for her studio sessions.

At the age of 18, Lewis received a lead role in The Lion King theatre show in Paris. However, she was removed from the role due to her back injury.

Though the album was not released officially, Lewis performed some of the songs live on BBC Radio 1 music station in 2004.

A single from her album named Private Party became a viral song on the underground urban music video in London. Talking about her hard work to achieve a record contract, she said,

''I tried to secire a record deal by doing things on my own way. I worked very hard but I never managed to land a contract. That's why I decided to audition for The X Factor. It's programmes like these which provide the best place to showcase fresh new talent,''

during an interview. Later, she decided to audition for the British reality show, The X Factor.

Leona Lewis went for an audition at the third series of The X Factor in 2006. She performed the track named Over the Rainbow for judges, Sharon Osbourne, Simon Cowell, Louis Walsh, and guest judge Paula Abdul.

Lewis was set in the 16-24 category, and Simon Cowell was her mentor. All over the show, Leona Lewis was compared with artists such as Celine Dion, Mariah Carey, and Whitney Houston, singing songs by all three of the artist.

Lewis achieved victory over Ray Quinn at the competition on 16 December 2006. She received 60% of 8 million televotes cast on the Grand Final. After winning the competition, Lewis signed a recording contract with Cowell's record label Syco Music for £1 million. Lewis upon winning said:

''I'm just shocked. It's unbelieveable. I feel like my dream has come true, the dream I've been dreaming since a little girl has come true. There were points I thought. 'You know what, I don't know if this is going to happen.' But with the help from my friends and my family, they all kept telling me to believe in myself and keep on doing it and I did and now I' here and thank you so much to them.''

The X Factor (Uk series 3) winner released a cover song of Kelly Clarkson titled A Moment Like This on 17 December 2006. In the UK, the cover song broke a world record after it was downloaded digitally more than fifty thousand times in 30 minutes.

The song was also listed as 2006 UK Christmas number-one single, selling more than 571,000 copies it the first week of its release. The song was also charted at number one in Ireland for six weeks.

In Feb 2007, The X Factor winner signed a five-album contract in America with Clive Davis' record label J Records. She signed a £5 million record contract and was showcased for many American music executives.

A press explained how Davis and Cowell would collaborate in a 'first-of-its-kind' partnership on both songs and selection of producer for her first album Spirit. She recorded the track for the album in London, New York City, Atlanta, Los Angeles, and Miami.

There she worked with various record producers and songwriters including, Walter Afansieff, Steve Mac, Dallas Austin, Ne-Yo, and Stargate.

The album was released in November 2007 and was ranked #1 on both UK Albums Chart and Irish Albums Chart. The album also became the fastest-selling debut album in both the countries.

In Jan 2008, two more songs were recorded for the album; Misses Glass, produced by Madd Scientist, and Forgive me, produced by Akon. It was released in 2008 in the United States and ranked #1 on the Billboard, making her the first British artist to peak at number with a debut album.

In 2008 August, Leona Lewis performed all-time hit single by Led Zepplin, Whole Lotta Love along with the guitarist from the band Jimmy Page at 2008 Summer Olympics closing ceremony in Beijing.

Lewis' first single from the album Echo is Happy. The song was written by her, collaborating with Evan Bogart and Tedder. The song was released on 15 September 2009 and ranked #2 in the UK and top 10 in Belgium, Ireland, Austria, Switzerland, and Japan.

In February 2010, Lewis' second song I Got You from the album Echo was released. The following month, she was featured in a duet titled Inaspettata with Italian singer Biagio Antonacci.

Lewis also signed a book deal in January 2009. She published an illustrated autobiography in October 2009. The book titled Dreams contains pictures mostly taken famous photographer Dean Freeman. On 14 October 2009, Lewis was assaulted by a 29-year-old man from south London, at a book signing for Dreams.

The man who violated her was arrested at the scene, whereas, she suffered bruising. The assaulting man was sectioned under Mental Health Act 2009. He was charged with common assaults as he admitted the assault and was hospitalized for some period.

In May 2010, Leona Lewis began her first tour, The Labyrinth, to support her two albums Spirit and Echo, along with a theme based on the movie Labyrinth. From July to August 2010, she was scheduled to tour North America assisting Christina Aguilera's Tour, however, Aguilera canceled the tour.

Shortly after completing the Labyrinth tour, Lewis started her work on her third album Glassheart. The album was released in October 2012, in the United Kingdom. Lewis described her album as it will have a darker tone than her previous albums.

Lewis also mentioned Kate Bush, Tracy Chapman, and Tears for Fears as the primary influences for the album.

In August 2012, Leona Lewis announced her lead single for the album Glassheart would be Trouble, released on 7th October 2012. It was ranked #7 on the UK Singles Chart.

On 2nd December 2013, Leona Lewis released her fourth album Christmas, with Love. The lead track for the album, 'One More Sleep', was released on 5th November 2013.

The following year, Lewis set a new record for British female solo artist with most top five tracks in the history of the UK Chart, and eight top five singles.

On 23rd September 2013, it was announced that Leona Lewis would make her appearance on Holiday!, a musical film. Following year, the movie was renamed Walking on Sunshine and was released on 27 June 2014.

On 3rd June, Leona Lewis disjoined ways with her record label of seven years, Syco Music, and boss of the label Simon Cowell. Later, she disclosed that her separation with the record label had come after many years of consideration.

Leona also said that when she mentioned her desire to depart from the label, she was threatened by the public being told that she was dropped out of the contract instead of parting with her own decision.

Of her departure, Lewis said,

''I was asked to make a record that would not have been true to myself. By all means as an artist in this climate, I was thankful to even get the chance to make another record. But I cannot make music that does not speak to my soul, and as scary as it seemed, I could no longer compromise myself and so I decided to leave.''

On 27 December 2013, Lewis signed a contract with Digital Spy and would start her recording session in Jan 2014, after completing the promotion of Christmas, with Love.

On 11 September 2015, following the release of the album, Lewis announced her third live tour, with an initial leg of fourteen UK dates. During the tour, Lewis visited cities including, Glasglow, Cardiff, Birmingham, and London.

On 18 March 2016, Lewis headlined Cirque du Soleil's One Night for One Drop performance in Las Vegas. On 26 May 2016, it was announced that Lewis would make her Broadway debut, as Grizabella.

Lewis lives in  Hackney, East London. She has learned classical and had a mezzo-soprano vocal range that spans four octaves. She has stated that she also practises operatic scales every week.

Leona Lewis was in a relationship her boyfriend, Lou Al -Chamaa who worked as an A&R scout for Sony Music Entertainment. The couple separated in June 2010. They lived together and knew each other since she was ten years old.

In September 2014, in an open letter to her fans, she disclosed that she felt depressed around the time of her separation from Syco. She also credited Simon Cowell and her training of meditation with helping her ''still the madness''.

Lewis was in a relationship with Dennis Jauch since 2014. They have had an up and down relationship in the past. The pair was spotted kissing in the Sapporo Restaurant in Liverpool in June 2015.

Since then, the pair has maintained a low profile, and there is no recent news regarding their relationship.

Lewis opened a Harrods sale turning down a seven-figure sum from Mohamed Al Fayed. She was announced as the new brand activist for The Body Shop in March 2013.

Lewis has also shown active support for Little Kids Rock. Little Kids Rock is a nonprofit organization that works to restore and revitalize music education in disadvantaged US public schools by donating items for an auction raising money for the organization.

In 2017, Lewis attended and supported the annual H.E.A.R.T Organization, a violence intervention programme.

Leona Lewis earns a heavy amount of money from her career as a singer and songwriter. With over several albums and numerous hit singles, Lewis' total net worth is estimated to be £24 million, according to celebritynetworth.

In 2006, Lewis received her first recording deal worth $1,600,000 with her mentor Simon Cowell, after winning The X Factor. The same year she signed Five-Album contract with Cowell's record label worth $7,940,000.